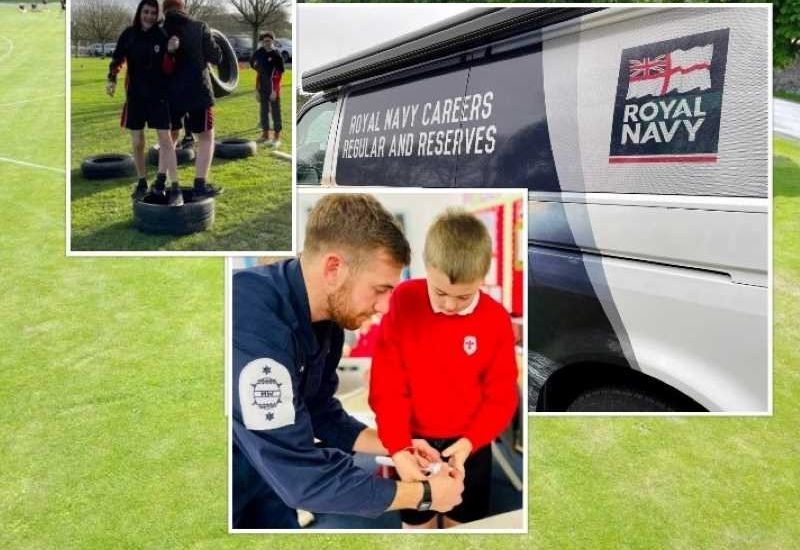 Problem solving, team work and fitness regularly feature on the curriculum at Blanchelande College, but in recent days students have been learning these skills in an unusual way.

When the boys and girls in years 6 to 13 were offered the chance to train with the Royal Navy, the College immediately adjusted timetables to provide students with a memorable opportunity.

Mike Elward, Vice Principal at Blanchelande, said it added to the "fully-rounded education" which the College offers to help students develop a wide range of people and leadership skills.

Pictured: Every student from the last year of the primary phase up to and including those studying A levels was offered the opportunity to work with the visitors from the Royal Navy.

Each year group undertaking the training was allocated a two-hour slot to spend with three Naval personnel and one Royal Marine from the Royal Navy's Attract Team. They were set various challenges designed by the military to test applicants' skills. These are said to be transferable to school and working life.

Some students were set indoor activities while others were based in the fields at Les Vauxbelets.

Opportunities available to students included physical activities such as navigating obstacles, trust exercises in which one person was blindfolded, Science, Technology, Engineering and Mathematics (STEM) projects and even launching distress flares over the roof of the College's main building. And there was a close call when one flare struck a tree.

Video: Students learned skills and made memories which will remain with them for a long time.

The wide range of year groups who took part meant that different tasks had to be set for different age groups.

Older students focused on STEM work and team building exercises. Sixth formers have returned to Blanchelande College since A level studies were reintroduced there in September 2020. The two sixth form year groups were split into teams of four to solve the tasks set by the Naval visitors.

Pictured: Blanchelande College was impressed by, and grateful for, the commitment of visitors from the Royal Navy, who were at College for four days working with students between the ages of 10 and 18.

There was heavy rainfall during some activities. This allowed students taking part to become familiar with a harsh reality of military life: training continuing whatever the weather.

Years 9 and 10 were asked to cross the school field, using tyres, while not actually standing on the grass. Year 9 also had the chance to plan for a silent cliff assault. Year 10 had to battle strong winds to tackle an engineering task.

There was also time for a question and answer session attended by students who wished to further their interest in the military.

Video: Poor weather did nothing to dampen the visitors' commitment to students or students' enthusiasm to make the most of an unusual opportunity.

Headteacher Robert O'Brien thanked the visitors, who were "absorbed into the school community and were hugely appreciated by staff and students alike".

"We are so grateful to the team for the visit and I hope that many other schools can continue to benefit from this kind of engagement," he said.