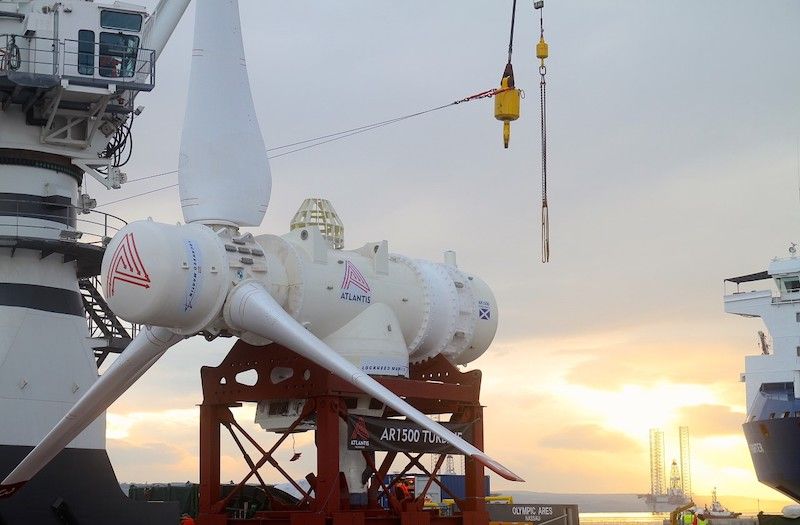 A pioneering tidal energy giant has signed an outline deal with Alderney's power company to end the island's dependence on fossil fuel.

If it succeeds it will see Atlantis sending power generated from a test array of turbines in the French Raz Blanchard to homes and business all around Alderney by 2022.

The £40-70 million project will arm Atlantis with the data it requires to fulfil an ambition for a 150 times larger array, a major part of it in the Alderney Race, in the coming decade.

The experimental scheme rests on the installation of a £15million undersea 'wire' that will run between the French grid, the two turbine test array and Alderney. As well as transporting AC power it will supply the island with a bundle of fibre optic cables from France, which if utilised for internet sypply could transform the island's
industrial capabilities. 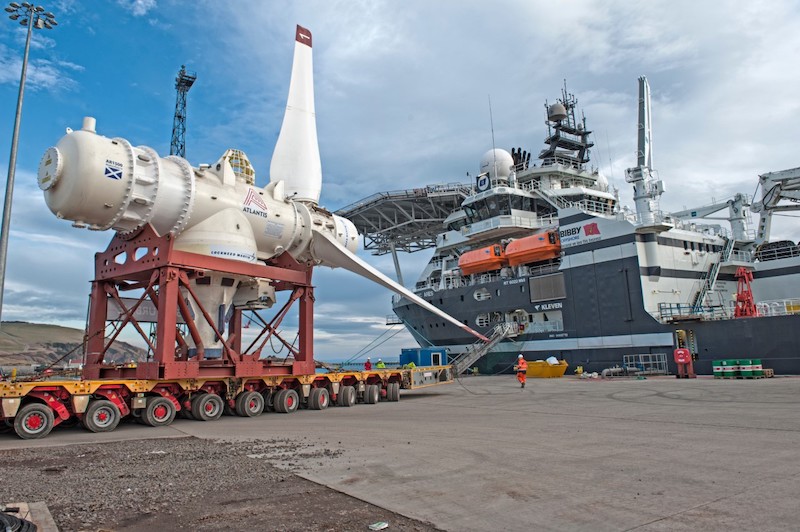 Pictured: Turbines could be installed to harness Alderney's tidal power.

The heads of terms power purchase agreement paves the way for a deal allowing Atlantis to supply electricity to Alderney at a fixed price for 25 years, freeing the island from  the escalating costs associated with oil, and creating a very marketable, 'green' island.

The project will be developed by Normandie Hydroliennes is a joint venture with regional investment fund Normandie Participations and local manufacturer Efinor, through which Atlantis intends to develop, install, and operate a demonstration array of four 1.5MW tidal turbines in the Raz Blanchard site off the coast of Normandy, France.

They aim to eventually create an array on both sides of the Race consisting of 600 turbines, generating 900MW of energy by 2027 – from which Alderney could harvest substantial revenues. 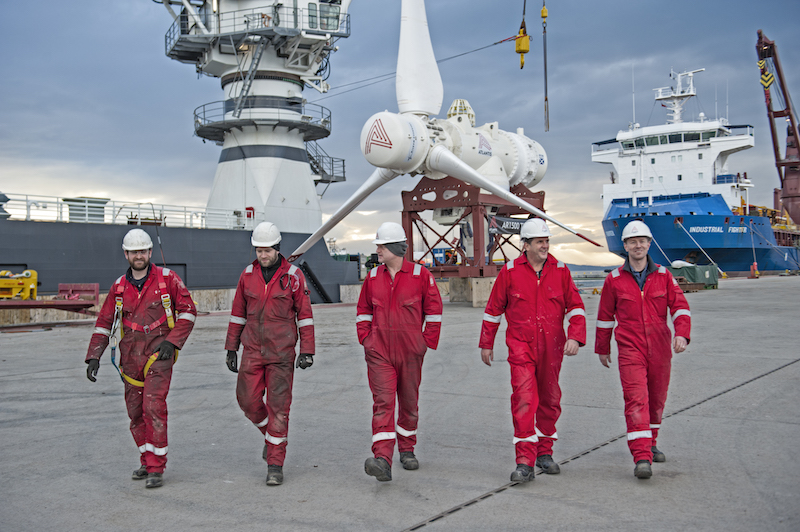 Pictured: Turbines could be installed to harness Alderney's tidal power.

To some the proposal seemed too good to be true. What did Atlantis stand to gain?

Mr Cornelius explained that Atlantis had first aimed to set up its test array in the Raz Blanchard and run electricity back to the French grid. But the French grid already has plenty of electricity feeding into it and France's wholesale power price is low, which created economic hurdles for the company. Selling their electricity at the
higher prices paid for power in Alderney would generate just enough cash to tip the balance and make it viable. But it is the 'decarbonisaion' of an entire island economy, unchaining it from diesel, which makes it a unique project – and one will tick many boxes when it comes to applying for EIB funding next year. The EIB has a
'Blue Economy' fund, which supports  innovative projects to create sustainable communities around decarbonisation.

Mr Cornelius said two years of work with AEL had gone into setting up the foundations for what for Atlantis is now their 'flagship' scheme.

"We hope that this project will be a blue print for other island nations around the world to follow."

Achieving it was vitally important to their wider ambitions, he said. Gaining Alderney's trust would hopefully pave the way into the Island allowing them to place tidal turbines in its territorial seas in later years.

It will also show the rest of the world that energy can be commercially harvested from the Race.

"Firstly it's about credibilty," he said. "It's really important that we are able to demonstrate over a period of time how a turbine performs and more importantly show the community that tidal power is real and commercially exploitable. It's also really important to us that we get environmental performance data and commercial performance associated with the turbines. We will get that data by operating this array."

Now the heads of terms agreement was struck, work would get underway on planning, gaining permits and consents and on seabed surveys, and if investment is granted, construction work would begin next year.

One of the most eagerly asked questions at the presentation was for details on the form on island infrastructure would take. Mr Cornelius stressed that no large converter stations would be required. "We are very very different to any previous approach that has ever been contemplated on the island. All we are doing is providing quite a small power cable which you can think of like an extension lead, which comes from the turbine array in france and comes into one of AEL's
existing substations. No different to power cables linking Guernsey and jersey. Minimal infrastructure on land once we land the cable infrastructure required is roughly the size of a filing cabinet – quite minimal in terms of visual impact."

The cable would not come ashore on any beaches, he said. It was likely to hit land on the rocky stretch of coast between the lighthouse and Corblets and go into Berry's Quarry, which has been taken out of the Island's Green Belt. 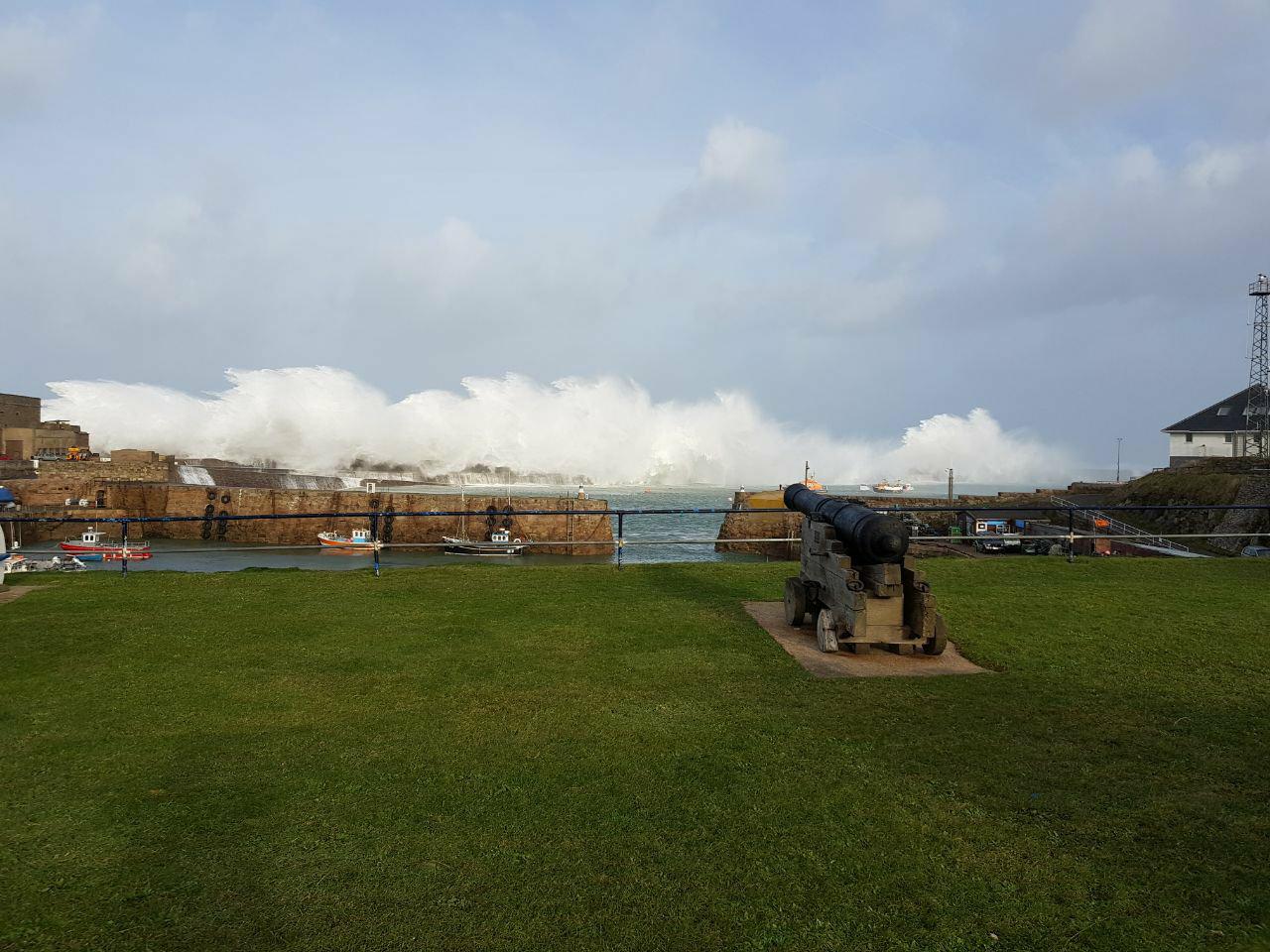 James Lancaster , MD of Alderney Electricity Limited, has worked with Atlantis for two years on the project. He was already investigating green energy schemes when Atlantis approached Alderney to outline its larger plans in 2017.

"This beautiful place in which we live is still 95 per cent reliant on fossil fuels,' he said. 'This is our first proper opportunity to look at reducing our carbon footprint and this alone will reduce IT by over 40 per cent. With the initiatves we are already working on which will be delivered in the gestation period of this project 50 per cent
carbon reduction for the island."

The additional potential benefits were huge, he said.

"This is such a great opportunity, bringing so much potential it is difficult to know where to start. As well as access to electricity at a stable price and much more of it than we currently have available, we also have the potential for a fibre optic link back to the continent and that comes as a bolt on addition to the project, there's
no additional cost for that. That's the thick slab of marzipan on top of your Christmas cake."

He stressed that Islanders needed to be part of the project for it to succeed.

"Right from the outset we need to have an open dialogue with the community,' he said. 'What I need is for the community to engage with
us to contribute in a positive way and help us design and build something we are all comfortable with and that we all think is a great project and a great benefit to Alderney. With the community behind us we can do that."