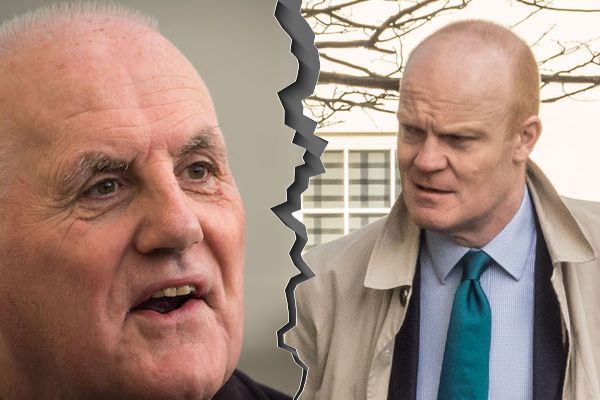 The fractures within Guernsey's government have been laid bare after an email was mistakenly leaked, highlighting the divide between our elected States members.

An email was sent by Deputy Gavin St Pier, the President of Policy & Resources and the island's Chief Minister, to 20 other deputies, therefore excluding 17 others and the two Alderney representatives.

He invited those 20 deputies to "compare notes, and perhaps plan a little ahead" before the next States meeting, which Deputy St Pier said had "plenty of opportunities for mischief to be made." They would be meeting in Jimmy's Cafe, St James, during the morning of Friday 6 July to do this.

Pictured: An excerpt of the email sent by Deputy Gavin St Pier, which was shared with Bailiwick Express by Deputy Peter Ferbrache

Accidentally, however, Deputy Peter Ferbrache was included in the email group. Deputy Ferbrache has forwarded that email on to the media, saying he was prompted to share the statement because there was a "clear inference that 'we' the missing 19 cannot be trusted and may act mischievously".

"It seems to be government in secret. I do not understand that approach as I can only act in a direct manner," his email said.

"On the face of it that is not Deputy St Pier’s approach. It leads me to muse that I wonder if there have been other examples of such conduct. I invite an open and unequivocal response from him on this.

"Without a clear explanation Deputy St Pier’s position as our senior politician has been seriously undermined."

Rumour is currently circulating that Deputy St Pier is forming his own political party in secret, and some of the Deputies not included in the email chain suggested this may be part of it.

Deputy Carl Meerveld, who has himself formed what could be referred to as the States' first recent political party in the form of the Islanders Association, said: "I am reliably informed that Deputy Gavin St Pier is forming his own political party, however it is being established in secret, by invitation only, rather than openly and transparently as both the Charter 2018 group and Islanders Association has been formed".

In the ensuing email conversation between Deputies, groups such as the Islanders Association and Charter 2018 were accused of being divisive, but Deputy Meerveld argued those groups were formed entirely in the public eye.

Express approached Deputy Gavin St Pier for comment early this morning and he cc'd us into an open reply sent to everyone in the original email chain opened by Deputy Ferbrache. 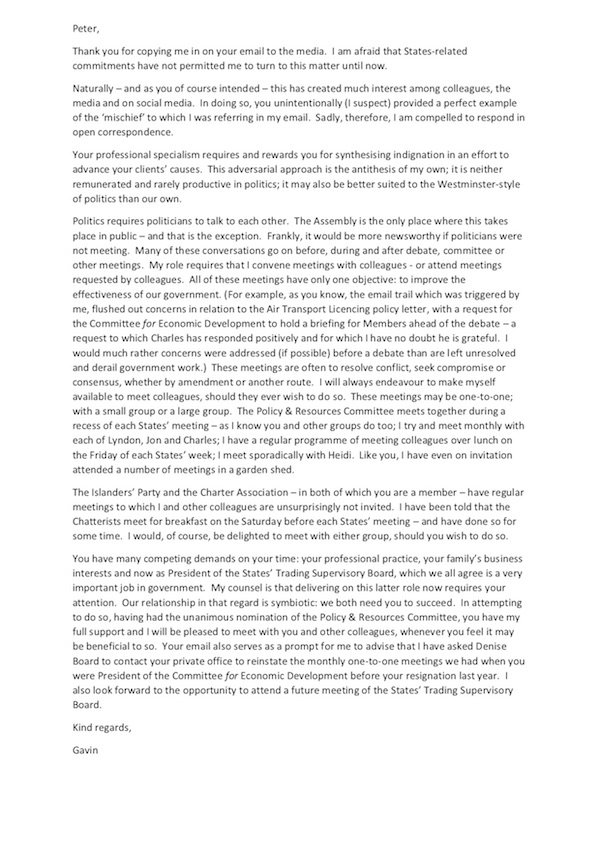 Who received the original email inviting them to the meeting at Jimmy's Cafe:

Of the 40 elected members of the States of Guernsey, which includes 38 Guernsey deputies and two representatives of the States of Alderney, 20 people received the invite to the meeting at Jimmy's from Deputy St Pier.

The ones excluded were:

I would like to make it perfectly clear to all states deputies exactly where the Guernsey Whig Party stands in relationship to our local politics.

The Guernsey Whig Party (free membership) is an alternative to some of the political views held by deputies: Inder, Smithies, Queripel (both), Le Pelley, Meerveld, Leadbeater, Mooney, Kuttlewascher, Ferbrache, Paint, Prow and De Lisle. ( Many thanks to Neil Inder for providing us with this list on his facebook page)