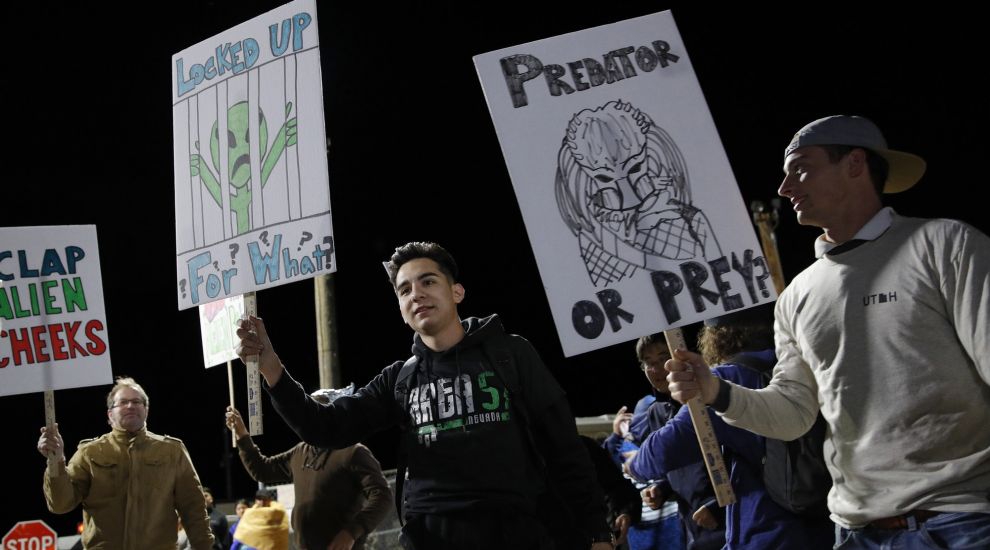 About 75 people have arrived at a gate at the top-secret Area 51 military base in Nevada and at least two were detained by police.

The Storm Area 51 invitation spawned festivals in the tiny nearby towns of Rachel and Hiko, more than two hours’ drive from Las Vegas.

Lincoln County Sheriff Kerry Lee estimated late on Thursday that about 1,500 people had gathered at the festival sites, and more than 150 made the trip several additional miles on bone-rattling dirt roads to get within selfie distance of the gates.

Millions of people responded to a June internet post calling for people to run into the remote US Air Force test site which has long been the focus of UFO conspiracy theories.

“They can’t stop all of us,” the post joked. “Lets see them aliens.”

The military responded with stern warnings that lethal force could be used if people entered the Nevada Test and Training Range, and local and state officials said arrests would be made if people tried.

“It’s public land,” the sheriff said. “They’re allowed to go to the gate as long as they don’t cross the boundary.”

A music group called Wily Savage erected a stage on Thursday near the Little A’Le’Inn in Rachel and began playing after dark for several hundred campers who braved overnight temperatures of about 7C.

The entertainment kicked off weekend events that also feature a gathering on Friday and Saturday at the Alien Research Centre souvenir store in Hiko.

Owner George Harris said it would focus on music, movies and talks about extraterrestrial lore.

Authorities reported no serious incidents related to festivals scheduled until Sunday. Hiko and Rachel are about a 45-minute drive apart on a state road dubbed the Extraterrestrial Highway.

Eric Holt, the Lincoln County emergency manager, said he believed authorities could handle 30,000 visitors at the two events, but residents are still braced for trouble.

“Those that know what to expect camping in the desert are going to have a good time,” said Joerg Arnu, a Rachel resident who can see the festival grounds from his home.

But those who show up in shorts and flip-flops will find no protection against “critters, snakes and scorpions”.

“It will get cold at night. They’re not going to find what they’re looking for, and they are going to get angry,” Mr Arnu said.