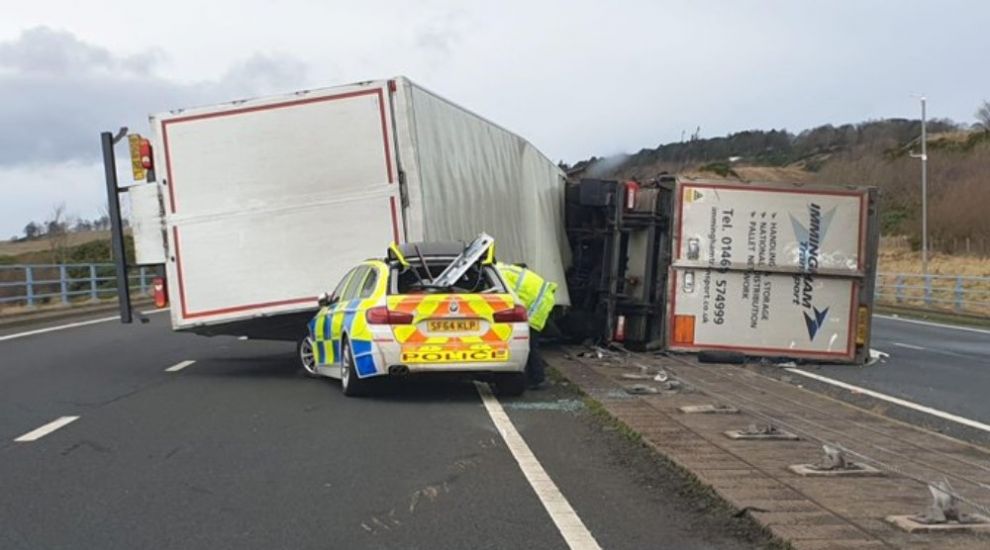 A police officer called in to request the closure of a busy road in Scotland after a lorry toppled over on to his patrol car during high winds.

The static police vehicle was “carrying out scene protection” after another lorry had toppled over between the two carriageways of the A1 between Haddington and Dunbar at around 10.15am on Tuesday.

Footage of the incident was posted on Twitter by Chief Superintendent Stewart Carle, head of the road policing unit, who said he was “relieved that one of my road patrol sergeants was not seriously injured”.

He said the officer, who he named as Sergeant Easton, “was as cool as a cucumber” during the incident involving his BMW.

Mr Carle said that during the call, the sergeant inside the car said: “We need to close the A1 now: a lorry has just toppled on to my patrol car. And I just polished it yesterday!”

A Police Scotland spokeswoman confirmed no-one was seriously injured in the incident, which closed the road until around 10pm.

Mr Carle added: “I nearly spilt my mug of tea but was quickly reassured when told the BMW was a ‘64 plate!”

It was the second incident recorded of lorries toppling over on the road due to severe weather on Tuesday.

Two other HGVs were travelling along the A1 and toppled over between Innerwick and Skateraw in East Lothian at around 7.45am, leaving the road blocked in both directions.

Again there were no reports of any injuries.