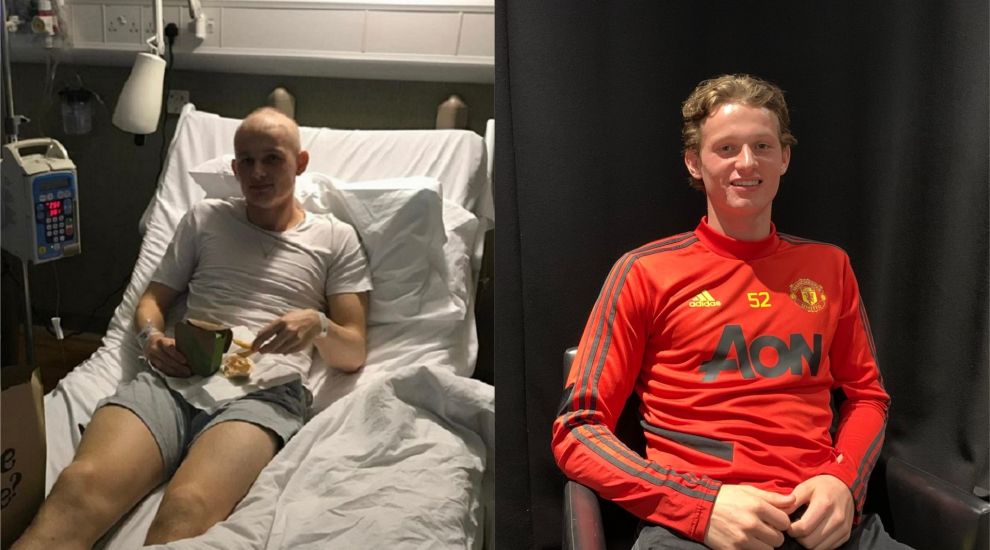 Max Taylor will not let cancer define him and wants to show other sufferers that it is possible to dream, with the Manchester United teenager on the cusp of his debut at the end of a year that started with punishing chemotherapy.

The 19-year-old is far from the best-known name included in Ole Gunnar Solskjaer’s callow squad in Kazakhstan, yet he is easily the most inspiring figure preparing to face Astana in the Europa League.

And should Manchester-born prospect Taylor make his debut on Thursday, it will be one of the sporting stories of the year.

With the club since 2014, the defender’s progress was brought to an abrupt halt in the cruellest of manners last year when diagnosed with testicular cancer as surgery, chemotherapy and yet more surgery replaced football as his focus.

“I always had a mindset of that there’s no way I’m not going to be alive after this,” Taylor told the PA news agency.

“But I think the message that I want to get out to everyone is it is possible – and it is possible to do more than what I’ve done after you’ve gone through such trauma.

“It is possible to get back wherever you want to go.”

To appreciate just how remarkable Taylor’s place in Solskjaer’s squad is, you have to understand the journey he has been on.

The defender, formerly known as Max Dunne, signed professional terms at Old Trafford in January 2018 – but by that August his world was turned upside down after a cyst on his testicle returned bigger.

“The cyst had gone and the cancer, the lump, was actually inside the testicle, so you wouldn’t have been able to feel it anyway, so it was actually a blessing,” Taylor said of that precautionary scan.

“Later in the course of everything they said it would have been your body signalling something for it to come back twice, almost like a red flag, like something’s not right, like an infection type thing. Something alien to the body.”

Taylor’s left testicle was removed on October 4 and a biopsy showed it to be the primary cancer, but a CT scan showed that it had “spread through the abdomen, the lymph nodes in the abdomen and started a few specks on the lungs”.

An intense, draining nine-week course of chemotherapy followed, with a single day involving as much as eight hours of chemo and four hours of hydration.

That demanding treatment got rid of the cancer, but more surgery was required to remove swollen lymph nodes: three on his left side and three next to the aorta – including one that had gone onto the main artery carrying blood from the heart.

“It was sort of a time where I am in no man’s land here – I can’t go back to what I normally do, I still feel ill from the chemo,” Taylor said of the six-week wait for his cells to recover enough for the five-and-a-half hour operation in March.

“I’ve got the all clear, but I can’t really be that happy because I just had a big surgery, can’t go back to football.

“That was like the low point because I was still in, couldn’t really do much like things you take for granted. I couldn’t even sit up because it was a cut straight through my abdominal.”

It was not until May that Taylor was finally able to return to the training ground, but the road to fitness was slower and more difficult than even he expected.

Yet the 19-year-old has kicked on with the support of friends, family and those at the Christie hospital, which the defender is raising funds for and recently returned to in a bid to help raise morale for those in the midst of their battle.

Taylor could also not have asked any more from United – whether it be the weekly visits from development player care assistant Andy Jordan and doctor Steve McNally, or the support of first-team coaches Kieran McKenna, who was Taylor’s Under-18 coach, and Michael Carrick.

The 19-year-old will also never forget then-manager Jose Mourinho coming up to him at the training ground at the start of his battle and saying, “don’t worry about it, you will be OK, you’re a fighter” – nor the support shown by successor Solskjaer.

“I remember the first day I came in to see the doctors and staff and I still wasn’t that well,” Taylor said.

“I was still a bit frail when I was walking and stuff. I’d get out of breath, even just going upstairs or whatever.

“When I went for breakfast he took me into his office and introduced me to coach Mark Dempsey, who I hadn’t met before, and we saw Kieran and Carrick.

“Then, after that, they took me outside training and just watched the session.

“It was amazing because I hadn’t obviously been back and then to go over and watch the first team and just stand with them and have a chat was really uplifting.”

Taylor, boosted by those around him, would take it a tiny bit further every week as he pushed to return, finally joining in with training in September and kicking on.

Having come off the bench for his first minutes as United Under-23s won at Swansea last month, the defender stepped out again when the development team beat Sunderland at Old Trafford on Friday.

Now, remarkably, he is in the first-team squad in Kazakhstan, preparing for a Europa League match and a potential senior debut.

“There’s a lot of people out there who think, like I did, that people only remember them for having cancer,” Taylor said. “They’d be like ‘ah, that’s what you’ve done, you’re amazing to get out of that’.

“The cancer is something that has happened, but it’s not going to be what people remember me for.

“I don’t just want to be a footballer; I want to be someone who people look up to in terms of raising money and helping others.”