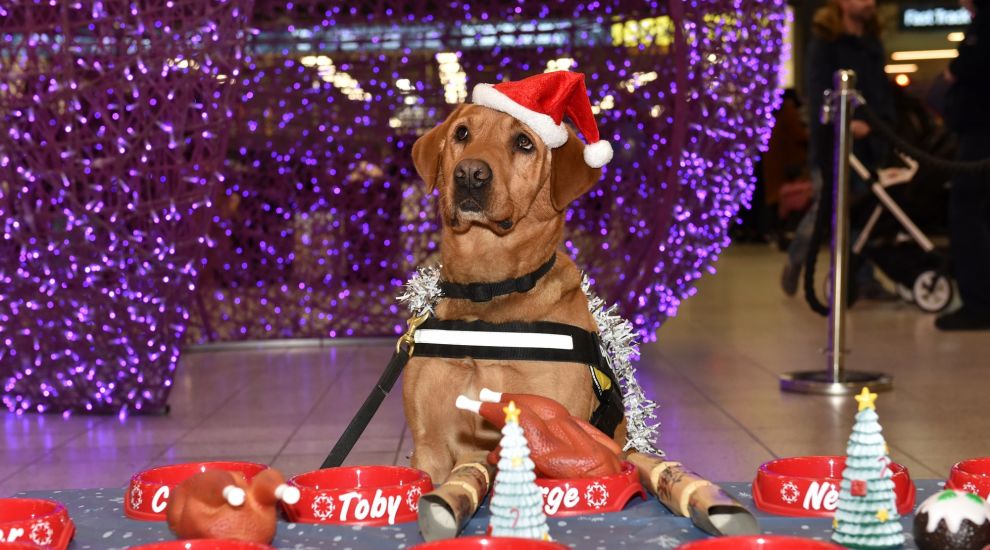 Santa Paws visited London Luton, as staff held a party in honour of the 12 police dogs that work at the airport.

To thank them for their work this year the six spaniels  — Chip, Milo, Laser, Peper, Poppy and Sparky — and six Labradors — Hunter, Quirky, Toby, Charley, Ned and George — each chowed down on Christmas themed dog treats and played festive games in the terminal.

The dogs are trained in a variety of skills, with some able to search planes, premises and luggage for drugs, guns and money, with others trained to sniff out explosives.

The dogs freeze when they detect anything, so they don’t encounter anything potentially harmful.

Clare Armstrong, head of Passenger services at LLA said: “Everyone at LLA loves the police dogs.

“Not only do they play a vital role in keeping the airport safe, they’re always a talking point with our passengers, so we thought it would be fun to reward them with a Christmas party.”

Police dog handler Andrew Parker from Bedfordshire Police, who heads up the airport dog unit said: “The dogs work hard all year round keeping the airport safe, so it was great to reward them with a few hours of fun in the terminal.

“Passengers and staff love to see the dogs patrolling the airport.

“As well as offering public reassurance they are a great way to engage with travellers and talk to them about important safety information.”