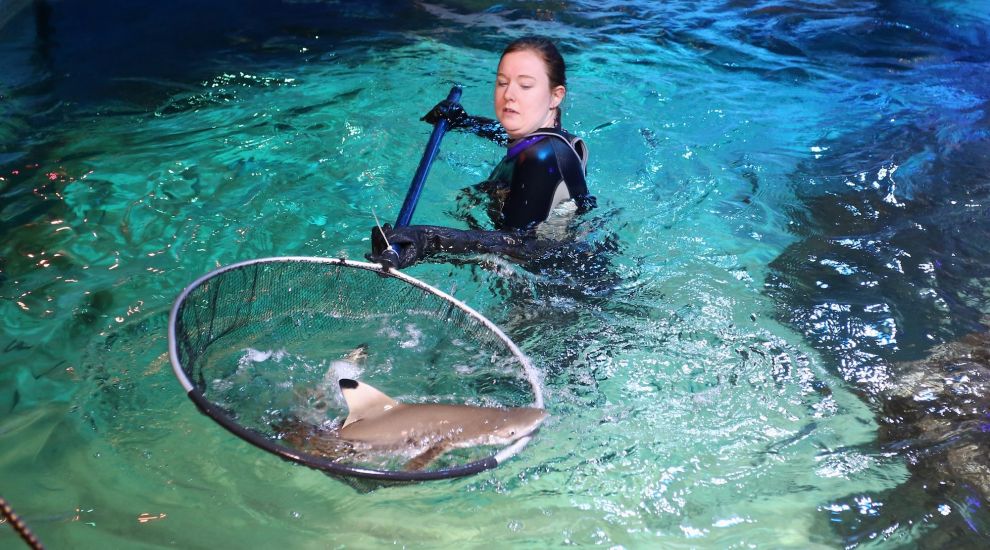 Twin baby sharks, born in the UK for the first time and hand-fed, have celebrated their first birthday in a major milestone for British marine conservation.

The blacktip reef pups have reached the birthday after a year of close supervision, which involved hand-feeding them mackerel and regularly catching each pup in a giant net to weigh and measure them.

On some nights, staff at Sea Life Blackpool slept over at the aquarium to monitor the pair — named Koda and Cleo.

In the wild, the survival rate of baby sharks is less than one in 10, with many shark species now endangered or threatened.

In the natural world, shark pups have to be completely independent, hunting and feeding themselves right from birth. Many die shortly after birth, facing threats from large predators, including other sharks and their own mother.

The sharks now measure almost twice as big as when they were born.

Male pup Koda is now 75cm long, while female pup Cleo is fractionally bigger at 76cm.  Their weight has almost doubled, increasing to 6.5kgs for Koda and 5.6kgs for Cleo.

Matthew Titherington, general manager at the centre, said: “This is an important moment. Baby sharks really struggle to survive in the wild, compounding already falling numbers due to shark fishing.

“I’m incredibly proud of the team and their achievement in successfully rearing the first shark pup twins to their first birthday. They are both in great health, excellent condition and continue to grow well.

“We want to do everything we can to support populations of these vulnerable species. Our shark pup twins provide a valuable boost to research surrounding this species, as well as strengthening breeding programmes across Europe, helping to safeguard shark populations.”