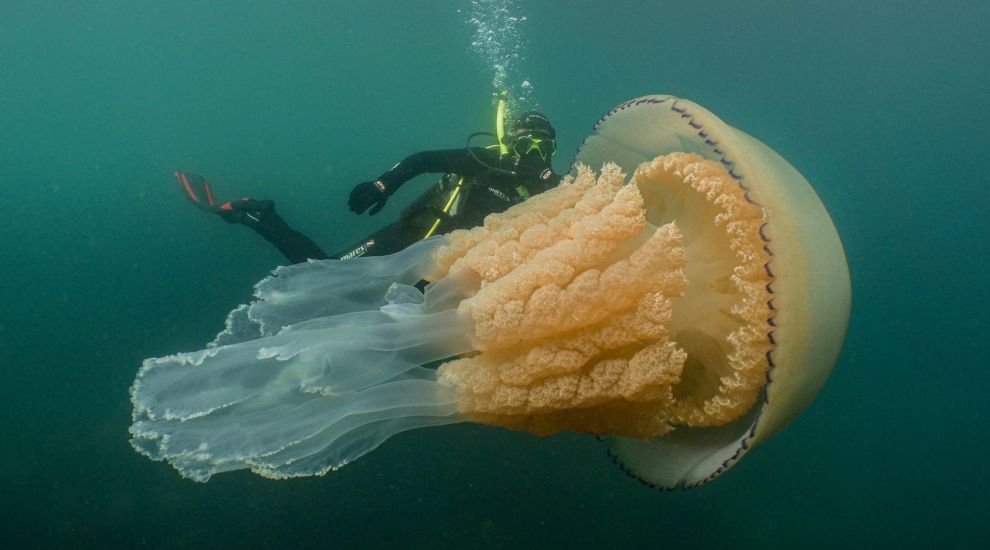 Divers swim with ‘giant’ jellyfish off coast of Cornwall

Divers swim with ‘giant’ jellyfish off coast of Cornwall

A jellyfish the size of a person swam with divers off the coast of Cornwall, in imagery which has amazed social media users.

“I turned around and noticed Dan was filming something and did a double take… It was enormous,” Ms Daly told PA.

Wild Ocean Week has seen the pair travel around Britain’s coastline whilst raising money for the Marine Conservation Society (MCS), with the “incredible” jellyfish encounter coming at their final stop.

“In seven days we came face to face with seals on the east coast, breaching whales up in Scotland and mega pods of dolphins,” said Ms Daly.

The journey finished in Cornwall where they had planned to see blue sharks, but windy conditions meant they settled for a dive instead – going on to film the jellyfish for “up to an hour”.

Ms Daly shared a photo taken by Mr Abbott to Twitter of her swimming alongside the jellyfish, where it has been shared thousands of times and people have marvelled at its scale.

“Nature threw us a bit of curveball,” said Ms Daly.

“The best part about it is it’s picked up a lot of attention and people are now looking to UK coasts and thinking ‘we have that… how amazing’.”

Ms Daly added that barrel jellyfish are “not that rare” and are often described as being “dustbin lid sized”.

“The initial moment of seeing it was pretty mind-blowing,” said Mr Abbott.

“We both surfaced and let out a massive cheer.

“I think sometimes we don’t realise there is this amazing marine wildlife in the UK, but it’s out there and all you’ve got to do is go and find it.”