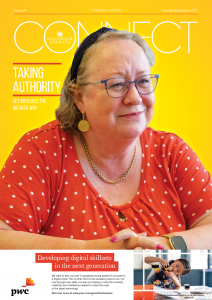 Autumn has arrived, after a summer that often gave a convincing impersonation of the new season. Looking back, there’s a temptation to question where the time has gone. It is perhaps better measured by things that have happened.

In this respect, the act of construction is one I have always found helpful in reconstructing the recent past. As I write this, the sun has just set on a beautifully clear and warm mid-September day, illuminating the surface of the peaceful lake that is best viewed from a vantage point closed to the public for many years.

In the previous edition of CONNECT, we explored the story of Saumarez Park’s iconic Japanese Fishing Pavilion, also known affectionately as the Duck House. Its reconstruction began in April, supported – in true Guernsey style – by myriad groups, employers and individuals in a spirit and conviction that I often wish could be distilled, somehow, into the decision-making processes higher up the public service ladder.

It says something that after years of formal tenders, political frustration and a States prioritisation process that has too often achieved only paralysis, it came down to volunteers to get things moving.

It took more than 500 hours of skilled labour, will, and a certain Will, who thrived under the weighty burden of inscribing the next chapter in a long and culturally rich history.

It has not disappointed.  And so in those months, the empty shell on the verge of the lake has rehomed a structure that with it tells a story that now has a future.

It was that project which led our eyes in the direction of another, in this instance the jaw-dropping proposed development of the Vale Mill, another structure in need of a healthy serving of TLC.

Despite describing the Mill’s acquisition, at times, as a moment of madness, the owners and developers have held faith that their investment may pay off into a one in a ‘mill-ion’ opportunity that breathes new life into a tired monument that had fallen into disrepair.

Elsewhere, sometimes preservation is what is needed, not reinvention. To that end, we met the new curator of one of Guernsey’s most characterful museums, a young history graduate giving his heart and soul to the maintenance of generations past.

However, the Folk Museum is much more than just a reminder of the past, as we got to know when we spoke to him about one of Guernsey’s most eclectic jobs.

And after another whirlwind year that has swept by us, we had to finish with the unexpected visit of a woman who has herself been on a rollercoaster journey since the almost Shakesperean drama of THAT Handforth Parish Council meeting went viral.

Jackie Weaver kindly agreed to spend some time in our company to talk about the need for new blood in local democracy, the empowerment that comes with self-belief and the ability to remain calm in the face of awkward situations.

She has entitled me to say that you DO have the authority to enjoy Guernsey CONNECT!