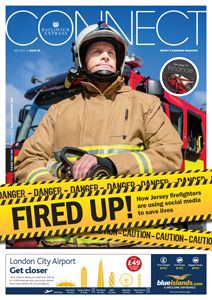 In 1999, the film director Baz Luhrman gave the world some sage words about skincare and a few more subjects besides when he released “Everybody’s Free (To Wear Sunscreen)” – a meandering, intuitive, spoken-word recording of advice on how to take on life and win.

Connect can completely endorse Mr Luhrman’s thoughts on sunscreen, and also his observations on how some of the most interesting people don’t seem to have a fixed idea of what they want to do with their lives. In support of the Luhrman Hypothesis (actually the thoughts of a Chicago Tribune columnist, which Baz set to music), this month we offer you: a former diplomatic service staffer who went from Downing Street to Uruguay to local radio; an ex-footballer who set up a global payments business that handles millions upon millions of pounds worth of transactions, and an Islander whose strange career trajectory from architect’s office to firefighter was interrupted by something even weirder - a basketball scholarship in the US.

We also look behind the headlines at what’s going on in the digital scene – there’s been no shortage of big talk about the possibilities and no shortage of government support, but what’s really happening on the ground? You can find out from the Executive Chairman of Digital Jersey, Paul Masterton, and a local app developer who is making moves to expand beyond these shores.

In other news, this month sees our columnists in fine form – The Fool has been mostly thinking about Ronald Reagan, our media guru iSpy has been musing on matters press-related, marketing expert Sam Watts is looking at how brand stories are engaging consumers around the world, and our political columnist is sounding off about the Waterfront: could it ever really have been a contender?

As always, I hope you enjoy it – please let us have any feedback at editor@bailiwickpublishing.com. And remember, wear sunscreen.