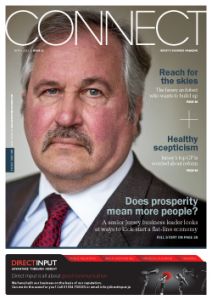 I recently flew as a guest of Blue Islands on their inaugural flight to Amsterdam and I have to say that it was truly memorable, not only because it is a wonderful city, but also because of the enthusiastic way in which we were greeted by the representatives of both Schiphol airport and the tourism department, ‘I Amsterdam’.

What struck me was the singularity of objective and clear understanding of the strategy of both operations. Schiphol is simply a gateway to the world. Their objective is to ensure that their customers transit through the airport as efficiently and cheaply as possible.

Hence, there is no air passenger duty (APD), which is a potential barrier to travellers and a competitive advantage when compared with UK hub airports. Simply, they want to handle as many people as efficiently and as cheaply as possible. They’re not really interested if you are visiting the Netherlands - that’s for I Amsterdam to worry about - they only guarantee that they’ll get the people on the ground. How easy does that make the job when the objective is so clear!

They had laid on a VIP welcome, as well as a TV crew to record this inaugural link. It seemed incredible that so much effort was made to welcome what in reality is a very small addition to the operations at Schiphol. But that didn’t seem to matter, the people at Schiphol have a clear understanding of the value their operation adds to the economy of the Netherlands and any incremental increase - no matter how small - has the potential to create more jobs as more people use the airport.

This brings me back to Jersey and my recent appearance in front of Scrutiny in connection with the proposed £5 million economic diversification fund. Whilst it’s a good idea, my biggest fear is that little of the money will ever be lent. The government has form here in the shape of the 2001 £10 million Tourism Development fund. Maybe if this had actually been invested in the industry Tourism might be in better shape today. It seems that the idea of giving money to the private sector was just too much of a risk for the decision makers of the time. Those charged with distributing the fund must remember that some ideas may only need seed capital of £500 and, therefore, shouldn’t just focus on the biggest, sexiest and most seductive proposals.

The objective must remain clear: economic growth no matter how small and incremental is the name of the game.