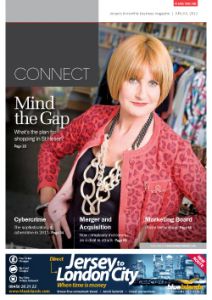 I couldn’t think of a better day to be sitting writing this foreword to the June/July edition of Connect – today GST goes up to 5%. I’ve heard people argue it is only a 2% increase, it’s still low compared to the UK’s sales tax, and this is the most efficient tax for the Government to collect. We were also told today that it’s up to businesses to decide if they want to pass it on! Amazing. Let’s be clear, this is a Government tax, not something to be imposed (or mitigated) by businesses.

None of those comments addresses the major problem with GST, which is the core reason it is there in the first place – the inability by the States to keep their spending under control. Chamber sees that problem as public enemy number one, and the principal threat to our prosperity and social wellbeing in the coming years.

We all want high quality public services, but to deliver them we have to create the income, and then the jobs, to pay for them.

So, here’s how the new Chamber Council will be focussing its efforts for the next twelve months.

What can we afford the States to provide?

That sort of over-spending makes it tough for everyone in Jersey, from pensioners, to employees, to business owners. Less competitive businesses means fewer businesses, which means fewer jobs which means less tax revenue for Government. It’s a vicious circle, with no long term winners.

Chamber has a big part to play in generating an informed debate on where the States should be spending our money, and where necessary, supporting tough decisions.

Chamber will be scrutinising whether the States are really following the most effective policy of economic development. We will be looking for a clear vision of how the economy should be diversified, and how the private sector is being allowed to deliver that.

Diversification may not always involve creating something new; it is also about nurturing what you have. For example, I’m afraid I still don’t see much real political commitment to reassure those in the tourism industry that Government is totally committed to its future. Similarly, in the light of the current threat to the fulfilment industry, the political policy is “wait and see”, rather than to act now and take the lead on reaching a negotiated compromise. Finally, Chamber will be holding the States to account for their actions not their words in relation to contracting firms from outside of Jersey. This is not about restricting competition; it is about investing in the local economy for the good of the whole community.

More red tape brings more cost to businesses, which in turn reduces their ability to compete and to generate income to fund people’s jobs. It is therefore detrimental to the economic wellbeing of this Island. Chamber will therefore be asking for a cost to business of new legislation that is proposed by Government.

To deliver the above we need to broaden our membership as widely as possible – the more members we have, the stronger the representation we can make on the above issues. If you’re not a member already, please get in touch.