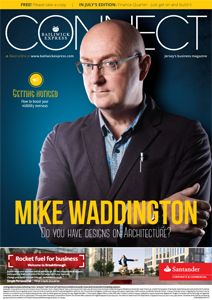 I know what you’re thinking. Since our political column this month covers the furore over the new International Finance Centre you’ve going to be served up a re-heated version of one the two main, tired, arguments. It’s either an affront to democracy and proof that we are being strangled in the most tangled web of political conspiracies since Abraham Zapruder pressed the record button on his video camera in Dealey Plaza,  Dallas on November, 22nd 1963; or, it is simply about investing in top quality office space so that the finance sector can grow and so continue to create jobs and pay our bills – remember, no less an authority than the Chief Minister said it was all about our children’s children. Presumably, by the time it comes to the great-grandkids we won’t need offices as we’ll all be working together via thought transfer.

Whisper it quietly, but our suggestion is that the truth lies (thankfully) nowhere near either Dealey Plaza, or the grandchildren. Rather, it sits petulantly in all its vainglorious pomp with the States decision back in 2007 to approve a plan for 620,000 square feet of offices (37 times more than the launch tenant has just signed up to, eight years later), 400 flats, 1,420 parking spaces, 65 self-catering flats and a hotel. Read Here’s the Thing on P78 to see where that political decision left us.

Without making any sort of link, our lead feature this month is on mental health in the workplace. We are repeatedly told that our future economic prosperity is contingent on becoming more productive, yet in the next news bulletin you’ll hear stories about stress-related illnesses getting worse, and the pernicious effect that conditions such as anxiety or depression can have on a well-functioning team. On page 20 we try and join the dots, a job made much easier by our two case studies, who have bravely been prepared to put their own stories into the public domain, in order to help our general understanding of these vital issues. That’s no easy decision in a small community, so I’d like to sincerely thank them both for their courage, and openness.

Finally, when planning your route through Connect this month, it’s worth making a stop, as ever, for refreshment on the pages provided by The Fool. If the Finance Centre row has sent your decisiveness scampering away for solace like a waterfront rabbit, he marks the 50th Anniversary of the Churchill’s death with a quotation:  “Fear is a reaction. Courage is a decision.” Decide to read Connect.