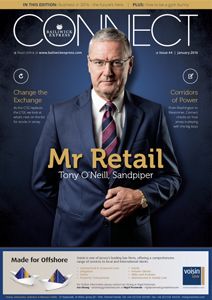 You’re going to hear them time and time again this month. Since it’s January, the number of predictions for the year ahead will be topped only by the number of seconds which pass by before you break the more important of your New Year’s resolutions. So here at Connect we thought we’d keep the future gazing to just one, solitary observation. Ready? Here goes: nothing you do this year will make much difference.

Wait. Before you turn the page thinking that we’ve all been hitting the celebrations (as in the drinks, not the chocolates) a little hard, and have failed to emerge, so far, from a rather dyspetic New Year stupor, we need to qualify that statement a little.

It’s always been the case that Jersey’s success, or otherwise, has its roots in the way we interact with those around us. Potatoes need UK customers to buy them, hotels need people to come and visit them, financial services needs markets just slightly larger than those provided by St Martin or St Ouen, and my personal favourite, privateering, only needs a well-laden ship to sail nervously, temptingly, past.

All of which means that rather than decisions in the States being the most politically important events which the universe of Jersey can possible imagine (consider that for a millisecond, and then try and stick to a ‘dry’ January) it’s actually the perceptions, ponderings and procrastinations in Westminster, Brussels and Washington which may threaten the greater effect.

And so, to kick off 2016 in Connect, we give you the Island’s new Head of International Agreements, Tom Le Feuvre. See page 8 to see what role he thinks the Island will be playing on the global stage this year.

Another of Connect’s principal actors this month is Tony O’Neill - you may know of him as the CEO of Sandpiper, King of the Franchise, and arguably the Island’s leading retailer. But rather than focussing his comments on yet another rehash of ‘Retail in Jersey - Discuss’, he continues our theme of broad horizons, and looks at expansion into Europe as the tune to pipe in 2016. You can find the notes he hits on page 16.

And if we’re looking at our place in the world, how about flipping it over and adding in the world’s place in us? More than half the people in Jersey weren’t born here (compared to about 12% in the UK), which would suggest that we are already well past the point of worrying about immigration. Here’s The Thing punctures the ‘Big Population Debate’ on page 34.

But it remains the only topic on which there is more misinformation than the one about a jolly, rotund man in a red suit who magically burgles our houses via the chimney, and exchanges perfectly good mince pies for garish ties, bad jumpers and unwanted socks.

Don’t worry, the States had a policy on this key issue, even if it was total rubbish - and it expired on 31st December, 2015. Happy New Year.