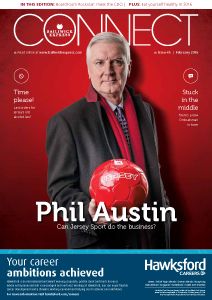 I’d like to make you a promise. Not one of those whimsical, transient statements of intent which we dress up as resolutions and trot out at New Year. Oh, no. This one will last through 2016. It’s simply this. In each edition of Connect this year we will try something new. That might be a new way of presenting the front cover, a new columnist, a new feature idea - something, anything, which we believe will keep you picking it up and enjoying what you find here.

We’ll do that partly because we want to make this magazine the very best it can possible be, and that’s a process not a single event. But we’re also going to do it because it’s much more interesting that way. Freezing, replicating, endlessly copying a current state is boring, and, well…dead. There’s a great Dylan line: “Inside the museums, infinity goes up on trial.” Well, inside Connect, ideas will spark, blossom and fade, only to be replaced by the next (and hopefully better) iteration.

Let me give you a few examples of that universal life force ‘change’, from this edition.

Our obvious starting point is the front cover…go on, turn back one page and take another look. After years of continually being told that Jersey Football was the best it could possibly be, we have finally noticed the big world out there, and pitched to join UEFA. That’s just one of the changes lining up for for sport generally in Jersey, many of which will present new opportunities for businesses. The full story is on page 16.

Or take the lead story on page 4. We’ve had a licensing law since 1974, and it’s one which has overseen (fuelled?) the shift in our drinking habits from convivial pubs to our own living rooms, perhaps sipping discounted alcohol bought in the supermarket - was that what was originally intended? Well, after 42 years it looks like the system is now flirting with change in a swing from legal to (gulp) political control.

And we mustn’t forget Connect’s columnists, that unruly bunch of incisive visionaries. Quite. The Adviser, Olaf Blakeley (page 45) calls for a swift end to our bizarre conveyancing system which still allows islanders to be left out in the cold, and probably out of pocket, all the way to the steps of the courtroom. It’s surely an area pleading for change. On that subject, we have a new columnist focussing on change itself, and how businesses can best manage it. Greenlight look at the new rockstar in the Boardroom, the ‘Chief Digital Officer’, on page 39.

Finally, the Fool. If you’ve never gingerly flicked to his column, hid behind the sofa, and watched another sacred cow being slaughtered in front of your eyes, then I urge you to change that habit in 2016. In this edition, the empty bleatings from the Unions about strike action in order to keep public sector costs at a suitably high level for taxpayers comes under his knife on page 32.

You might want to pop down to your local supermarket for a discounted bottle of Merlot, before you read it.