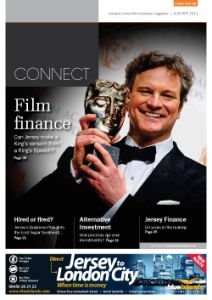 I was reflecting on the first Chamber Executive Council meeting I have chaired as President, and the wide range of subject matter that was raised. There was a good deal of frustration with various issues, but still a very strong sense in all the discussions of ‘what’s best for Jersey?’ The Chamber of Commerce is often criticised as being either self-interested, or in some way ‘too’ pro-business, at the expense of all other groups in our society. Nothing is further from the truth, but sometimes that inaccuracy gains credibility simply through repetition.

One of the key sections in my manifesto is to break down this artificial barrier which is erected around ‘business’ – yes, Chamber members will generally either work for, own or manage a business (although we have both public and ‘third’ sector members too). But is it a huge leap from there to say that the simple fact of employment somehow means that everything Chamber says is in some way fulfilling a very narrow self-interest. Inconveniently for critics, reality is far more complex – we need to start seeing the connections between tax rates, red tape, social services, housing, education, the environment and the multitude of other strands which when woven together make up the thread of Jersey life.

Of course, the same is true of our Government: if we continually criticise and repeat that everything that is done by the States is inefficient, then we miss the true (and more complex) picture. I think it is exceptionally unhelpful to polarise this argument into the private sector always criticising the States for mismanagement and inefficiency, and the public sector claiming ‘cuts’ always mean losing front line services (teachers, nurses, police officers), and regulation keeps businesses in line, so the more the better. Within that dynamic, the only loser is Jersey.

So, given the hugely challenging economic environment which puts pressure on public and private sector alike, what’s the answer? The word that comes to my mind is courage: the ability to act rightly in the face of popular opposition, shame, scandal or discouragement.

We have so many great individuals in this Island, in both the public and private sectors, who know what needs to be done to take Jersey forward, yet feel unable to put their head above the parapet for fear of criticism. Unfortunately, the safe position is very often a short term position. It takes true courage to break new ground – Einstein is credited as saying that if a good idea doesn’t seem ridiculous at first, then it isn’t a good idea.

Under my Presidency I want to encourage people to be courageous, to rise above the criticism and propose new ways in which this Island’s assets can be managed to deliver an economy that is both resilient and sustainable, and one in which everyone has a part to play.