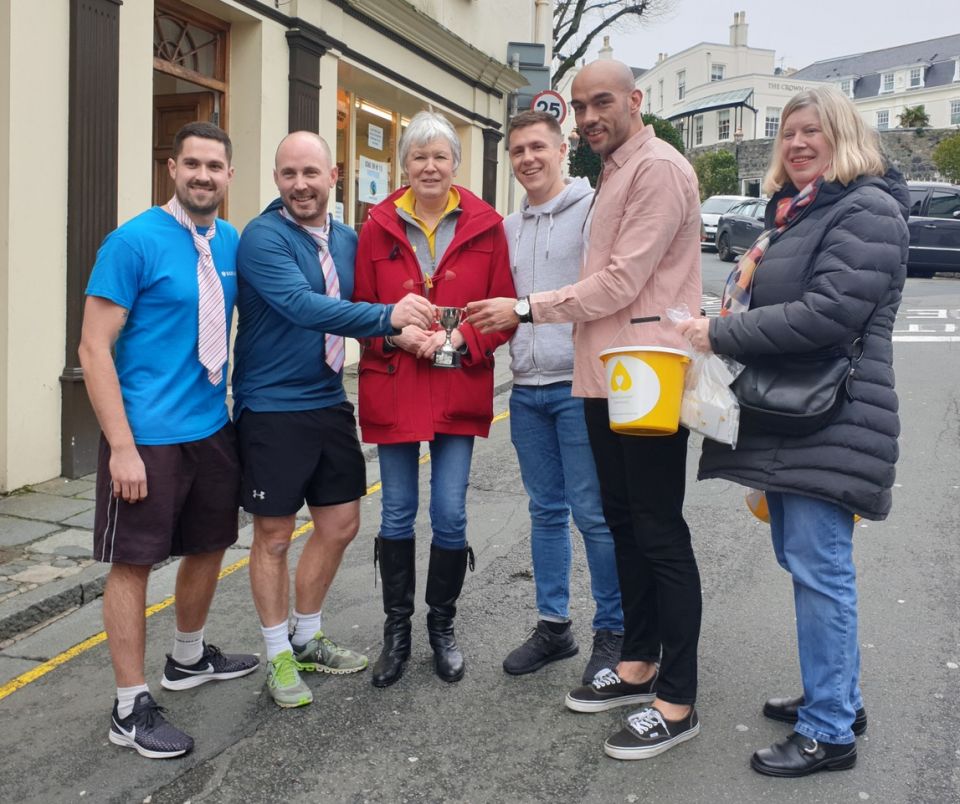 12 teams made the three-legged dash up the street to help raise awareness of bowel cancer in Guernsey and raise funds for the charity.

The race attracted teams from Ravenscroft, Skipton International, Equiom and Barclays. Each heat saw two teams make their way up the hill, legs bound with a loud tie, in an effort to get the fastest time.

First up to the plate were two of the four Barclays teams and they soon found their stride and set times around the 20-second mark, for fellow competitors to beat. The first team to finish the race in under 20 seconds with an impressive time of 17.29 was fellow Barclays team Steve Gibson and Scott Bougourd.

It wasn’t until Naro Zimmerman and Will Wakeham of NSM stepped up to the start line that the time was broken. The dynamic duo sprinted up the hill finishing with a lightning-fast time of 15:69 seconds.

As with last year, the two fastest teams took their places behind the start line to determine the winner. However, they both came out with times within milliseconds of each other it was agreed that it would be a tie, with each team getting the trophy for six months of the year.

Speaking of the event, Sara Gould, Director of Bowel Cancer Guernsey, said: ‘We want to say a massive thank you to Skipton International for sponsoring the event for a second year, without their support this race wouldn’t have been possible.

‘Loud Tie Day is an annual event that we use to help raise awareness of bowel cancer in Guernsey and of the charity.

‘We’re delighted with how the event went, there was a fantastic atmosphere with all the teams cheering their competitors on and it was great to see so many people come and take part. We also had an on-the-day team entry from Health Connections, it’s great to see charities supporting each other. Hopefully, this annual event will continue to grow for years to come.’

Aaron Walden, Commercial Manager at Skipton International, commented: ‘It was great for the Skipton Community Fund to be involved again in this event to boost awareness for Bowel Cancer Guernsey. We had a brilliant turnout and there was definitely lots of competitive energy in the air!’

Events such as these are vital in raising awareness of not only the charity but also of bowel cancer. The charity is keen to stress the importance of islanders knowing the bowel cancer symptoms and going to their GP should they have any worries.

For more information about bowel cancer signs and symptoms, Bowel Cancer Guernsey and their future events head their website, www.bowelcancerguernsey.org or their Facebook or Twitter pages.