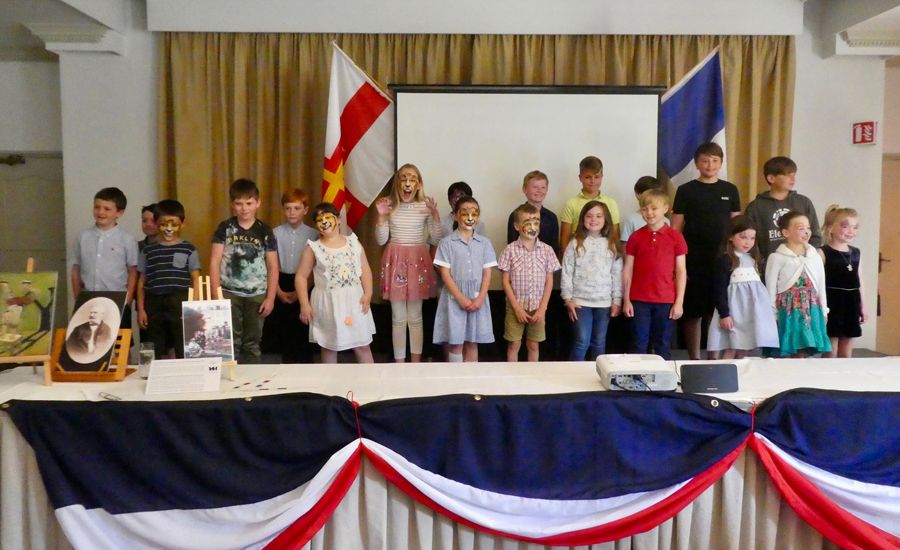 The children behaved impeccably and, as the photos show, enjoyed themselves immensely.

Photos of Victor Hugo and his grandchildren and tables draped in colourful bunting and heaped with luscious cakes and sandwiches set the scene. Enthusiasm grew as the talented face painter, Joni Nettleship, transformed the children’s faces into beautiful lions.

Prize winners, and their siblings, were treated to sandwiches and cakes and super little lion cupcakes created by the St Pierre Park chefs.

Winners received a limited-edition mug designed by Victor Hugo’s great-great granddaughter, the international artist, Marie Hugo. Unable to attend due to recent events, Ms. Hugo sent a letter to the children of Guernsey explaining that Hugo’s poem, ‘L'Epopée du Lion’, inspired her to paint a lion and a little boy to decorate the mug given out as awards. She sent congratulations to the winners and she said they had all made great pieces of art.

Mrs Bott told the children, “Victor Hugo would have been overjoyed to see you all here, as he adored children. He would have been thrilled and perhaps rather surprised that Guernsey children like you entered a competition to illustrate one of his poems.”

Mrs Bott thanked Caterina Allaway for design and calligraphy, Melissa Mourton and Roy Bisson for their help with the organisation, Margaret Jones for getting the competition up and running, and the judges, Angie Tolcher (Guernsey Arts Commission), Mme Odile Blanchette (Hauteville House), and Timothy Adès, who translated Hugo’s poem into English.