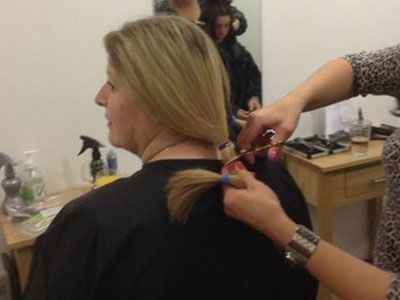 Two members of staff from Rossborough Guernsey had their locks snipped so that their hair could be used for children’s wigs.

Jorden Toms and Karyn Jackson each had seven inches cut from their tresses.

Their hair was sent to Little Princess Trust, which provides free wigs to boys and girls who have lost their hair through cancer treatment or conditions like alopecia.

The women said that while they were nervous beforehand, it was all for a good cause.

‘When you think about it our hair will grow back but for these children who have lost their hair through terrible illnesses and conditions getting a wig can make such a difference to their self esteem at a time that’s already so difficult,’ said Mrs Jackson.

Miss Toms added: ‘We are grateful to our colleagues who sponsored us for doing this because while the charity wants hair donations it also relies heavily on cash donations. We are told that each wig costs Little Princess Trust £350 and they give them away for free to the children who need them.’

‘By donating their hair, Jorden and Karyn have contributed to a real-hair wig for a poorly child. As a result of this type of donation, the charity receives from the manufacturer a number of wigs at no cost,that can be given to sick children,’ she said.

‘By assisting the charity in this way, Jorden and Karyn have saved the charity money and helped sick children at the same time.’

Ian Stewart, managing director at Rossborough, said he was proud of his two members of staff who had the full support of their colleagues.

‘It takes some courage to have such a large amount of hair cut off but Jorden and Karyn were committed to doing this and I think it’s a fantastic thing for them to have done,’ said Mr Stewart.