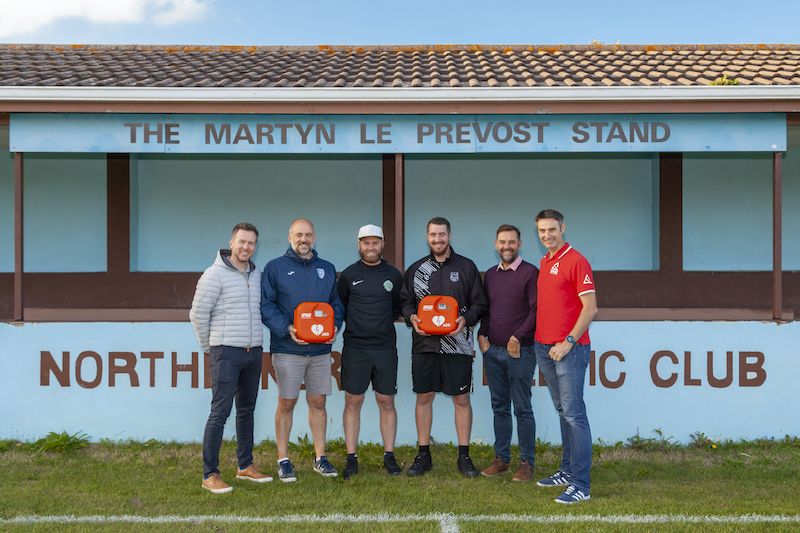 Local football clubs St Martin’s AC and Northerners AC and the GFA training base now have defibrillators on site, thanks to three local businesses.

Swoffers, Clicksmith and Spike Productions pledged to ensure that every club in the island had access to the life-saving equipment, after Danish player Christian Eriksen collapsed during his Euro 2020 match against Finland after suffering a cardiac arrest.

Checks found that the grounds at Northfield and Blanche Pierre Lane and the GFA at Victoria Avenue were without defibrillators.

“Swoffers works closely with Clicksmith and Spike Productions and after seeing what happened on the pitch back in June, we were keen to do something together locally,” said Swoffers Director Andre Austin.

“The immediate assistance of the medical team in the Euros match showed just how important this equipment is. There is no time to spare in a situation like that.”

The Cardiac Action Group Community Resuscitation Development Officer, Mike Froome said: “In the event of a cardiac arrest every second counts. Thanks to Spike Productions, Swoffers and Clicksmith, three more lifesaving 24-hour Public Access Defibrillators (PAD), will be available to help reduce the time delay between cardiac arrest and shock, and increase the number of people able to respond to out-of-hospital cardiac arrest, making 120 PAD sites in the Bailiwick.”

Gary Roberts from the Guernsey Football Association thanked the three businesses for their support.

“This now ensures that each local football club in Guernsey has one of these machines located at its ground, and which are also accessible to the general public,” said Mr Roberts.

“As the world saw first-hand during the recent European Football Championships, defibrillators are vitally important in helping to save the life of someone experiencing a sudden cardiac arrest, including when playing football.

“These new defibrillators ensure that the local grassroots football community – and wider island community – have greater access to what could be life-saving equipment, and on behalf of Guernsey football, I would like to thank Swoffers, Spike Productions and Clicksmith for this support.”

Ben Hunter from St Martin’s AC added: “We are very thankful to be able to have this at our football club, it will be great for all members of the club or the community to be able to use if ever needed.

"We have more than 300 people using the club during a week, so to have access to this will be lifesaving if ever required.”

The CRDO is working with all the football clubs and other venues delivering the free PAD site awareness, CPR & AED training sessions. CAG also offers this free training across the island throughout the year.