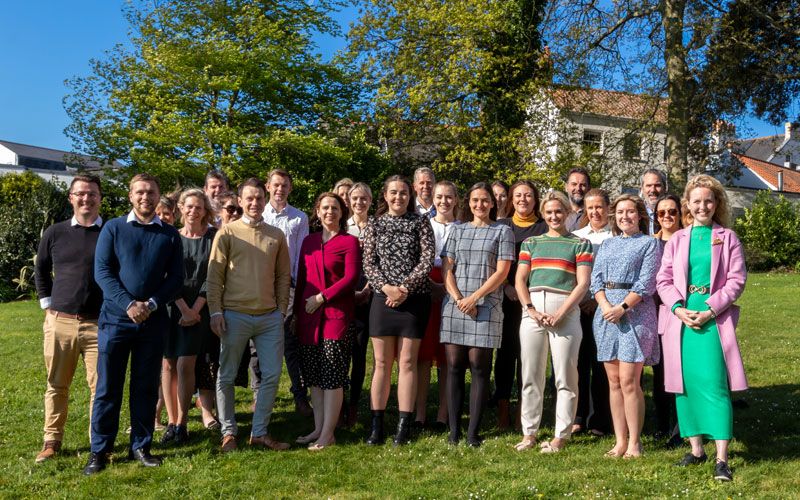 The technology, the prices, and the marketing have all changed drastically, but as Swoffers Estate Agents celebrates its 50th anniversary, the company’s traditional values of honesty, hard work, innovation, and excellent customer service have all stayed the same.

To mark the milestone, Swoffers has been digging back in its archive in the attic to look at how the property market has changed over the last half century. The business opened its doors in 1972, and since then it has handed over the keys to thousands of homes.

It started on St Julian’s Avenue next to the Swan Inn, and after five years it moved up the hill into a tiny corner office of the current premises at Ann’s Place.

Within six months of opening the company had sold lots of properties, including 1, The Citadel at Fort George for £65,000, Val au Bourg above Saints Bay for £50,000, and Charnwood at Hauteville for £24,000. Fast forward 50 years and the market values of those homes have increased by thousands of percent.

From humble beginnings, Swoffers is now the biggest and most successful local agency, consistently selling and renting the most homes. Today there is a workforce of more than 30, and it is 100% locally owned, with all five directors working in the business.

Director Spencer Noyon has been with Swoffers for 25 years, and he said the technology had been one of the biggest changes he had seen.

‘When I first started a computer had just been introduced, it was a massive white box in the corner of the desk, and the directors at the time refused to use it because they had their Rolodexes to contact people,’ he said.

‘There were no mobile phones so I kept a collection of 10 pence pieces in the car, and in between appointments I would find a phone box to collect my messages and then ring clients back.’

In the 90s, photography was still being done on film, so Spencer would run down Smith Street to Boots each afternoon clutching camera rolls to be processed.

‘You’d see other agents running down the hill, and one hour later you’d run back down again and pray there was a decent shot there to stick on the particulars, and then at 5pm you’d be folding up the particulars into envelopes and putting them in the post.’

Swoffers was the first local agency to have a website, despite early scepticism that it would never take off.

It is now the most powerful and most visited estate agency website on the island. We were also the first to launch a dedicated property magazine.Despite embracing the massive changes over the last 50 years, some things have stayed the same. Director Shauna Clapham has been at Swoffers for 35 years. She put the company’s longevity down to innovation and good people skills.

‘You have to know when to listen and not speak, and you have to build trust,’ she said. ‘Reputation is everything on a small island, you have to be upfront, people coming from the UK really appreciate that.

‘Another attribute is discretion. Buying and selling houses is often an emotional process and we have to be sensitive to all parties’ needs and wishes. ‘So, you've got to be all things to all people, and have patience, and above all, have a really good sense of humour.’

To celebrate the golden anniversary, Swoffers is stepping up its charitable commitments with the launch of ’50 acts of kindness’. Members of staff are coming up with their own ideas for 50 ways to give back to the community.