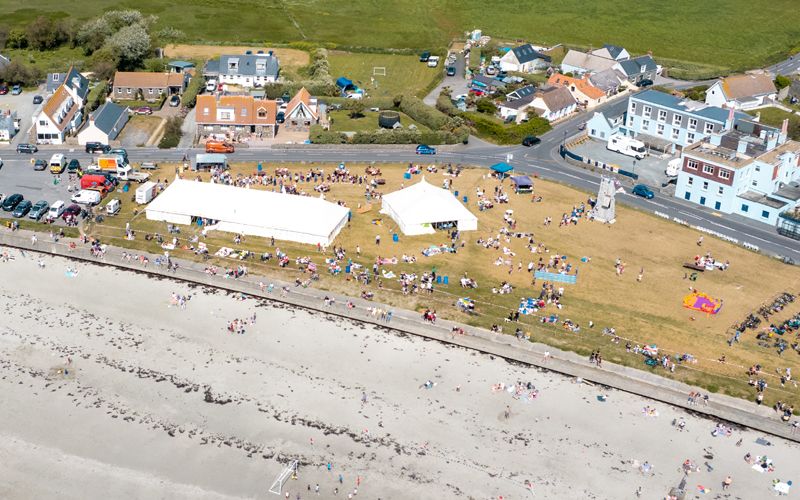 The constables of St. Pierre du Bois have raised £4,100 to be split between people in need in Ukraine and La Houguette school, following a highly successful first parish-specific Liberation Day event.

St. Pierre du Bois hosted its own event for the first time, following the States of Guernsey’s decision to provide funding to individual parishes to run their own events, rather than centring the celebrations around St. Peter Port. St. Pierre du Bois constables used the funding to put on an event on L’Eree common for the first time, which ran from midday into the early evening ending at sunset. They also reached out to corporate sponsors for additional funding, including headline sponsor Rocq Capital who came on board early with their commitment which enabled booking the tent hire and bands which in turn meant that the event could be much larger and be a full day and evening event.

Using contacts from the West Show, the constables hired a bar and several bands performed, including Coco Cabana, Space Pirates of Rocquaine and Buffalo Huddleston. Beach games were put on at L’Eree bay and the event was marketed to be a family-friendly affair open to all. Holding the event at L’Eree common also meant that the cavalcade could be enjoyed by all as it passed.

All in all, the event raised £4,100, all of which will go towards supporting two very good causes. £600 of the funds will go to La Houguette school, to fund the building of two wooden reading huts for the children to enjoy. The remaining £3,500 will go towards the Bailiff’s fund, helping people in the war-torn country of Ukraine, which was especially poignant as Guernsey celebrated its day of freedom. In addition to this the “Styx” tea & cake tent raised additional money for their project to develop their community centre.

Mike de Laune, constable of St. Pierre du Bois said: “I could not be more pleased with how the event went. Liberation Day is a time where the community comes together, and the people of St. Pierre du Bois did so in spades to make this a reality. I’d like to thank so many people, but chiefly Andre Mayor, Anne Thomas and Steve Champion Smith, Lisa Vidamour and Neil and Demelza AKA “The Vraic Eaters Tavern” and the ACLMS at the States of Guernsey. Without their support, the event would not have been half as amazing as it was”.

Tim Langmead, Jr constable of St. Pierre du Bois said: “We were proud to run an event that brought the community together and raised vital funds for those in need. The event drew in people from all across the island, which was very pleasing to see. If the States of Guernsey decide to run parish-based Liberation celebrations again next year, we will absolutely be ready to do it all over again”.