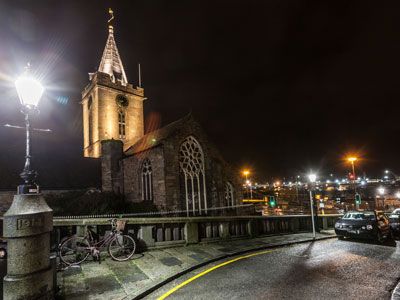 The “Loafers’ Wall” in St Peter Port is undergoing a full refurbishment in preparation for a commemoration ceremony on 10 May. The event will celebrate 100 years since its completion in 1914 and pay homage to those who fought in the Great War.

The Constables of St Peter Port recently arranged for the replacement of one of the wall’s antique lights, along with the installation of two additional lamp posts. The wall itself is also being fully restored ahead of the ceremony.

Located opposite the Town Church at the bottom of Fountain Street on Church hill, Loafers’ Wall was built by the States of Guernsey as part of an early 20th century redevelopment programme for the area.

‘A number of buildings were demolished in this area during the redevelopment, along with the original wall. The design of the new wall was intended to showcase the skill of local master craftsmen and masons and was completed in 1914 just prior to the declaration of war.  The wall was later given its colloquial name because of the “loafers” who often convened along it during the 1900s said Jack Honeybill, executive officer of Town Centre Partnership.

‘It has such a rich heritage and it is wonderful that the Constables are restoring it to its former glory. The Town Centre Partnership is committed to urban restoration in St Peter Port and pleased to be involved in the celebrations surrounding this,’ he said.

During the memorial ceremony, His Excellency the Lieutenant Governor Air Marshal Peter Walker will unveil a commemorative plaque to mark its anniversary. Wild flowers, usually found on the battlefields of Flanders, will also be placed along the length of the wall in memory of all who fought in the Great War.

Immediately after the ceremony, the Town Centre Partnership is hosting a reception in the Guille-Allès Library, ahead of a Beating Retreat in Market Square performed by the Lossiemouth Pipes and Drums (formerly Kinloss No. 201 Squadron RAF). The traditional Lament and Last Post will be included as a mark of respect to the fallen.

A formal Military dinner will follow in the Inner Street of the Market Building, where guests will be entertained by a professional cabaret.

Throughout the day of the ceremony, the pipers and local cadets will be making collections around the town centre.  The money raised will go towards funding the new Allied Aircrew Memorial at Guernsey Airport.

Members of the public are invited to attend both the ceremony at 6pm and the Beating Retreat at 7.15pm.

Tickets for the formal dinner at 7.45pm are £50 each (tables of 10) and tickets for the Guille-Allès Library reception are £10 each.  Tickets and further information can be obtained by contacting Jack Honeybill, executive officer of Town Centre Partnership at jackhoneybill@hotmail.com;  John Silvester, chair of the Allied Aircrew Memorial committee at silvester@cwgsy.net; or Evan Ozanne committee member at evan@cwgsy.net.