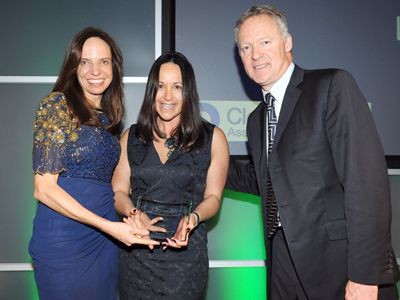 Legis Group has been recognised as one of the leading international finance firms at the Citywealth International Finance Centre Awards 2014, being named Guernsey’s ‘Trust Company of the Year’.

Alison Parry, managing director of trust and corporate services for Legis Group and winner of the ‘Women in Wealth category at last year’s event, collected the award at a ceremony held at the Grange City Hotel, London on 23 January.

Now in its third year, the IFC Awards were established to highlight the excellence of the advisors and managers in the private wealth sector in the major international financial centres.  This year the contest attracted 5,000 online votes which were monitored by an international panel of highly respected practitioners from all sectors with experience of working with advisors in all the jurisdictions covered.

The ‘Trust Company of the Year’ category is awarded each year in recognition of those companies who have excelled in achievement, innovation, expertise and service in their respective jurisdictions.

“Legis Group had a successful 2013 and continues to cement its place as a best of breed independent.  Winning such awards really illustrates the extremely high level of professional client service provided by the team and their unparalleled knowledge base,” said Stuart Platt-Ransom, chairman and chief executive officer of Legis Group.

Earlier this month, it was announced that Butterfield – the runner up in this year’s Guernsey “Trust Company of the Year” category – has reached agreement in principle with Legis Group to acquire the Guernsey-based trust and corporate services business, subject to regulatory and other approvals. The acquisition is expected to be completed during the first quarter of 2014. Butterfield was also awarded Trust Company of the year for the Caribbean and Switzerland.