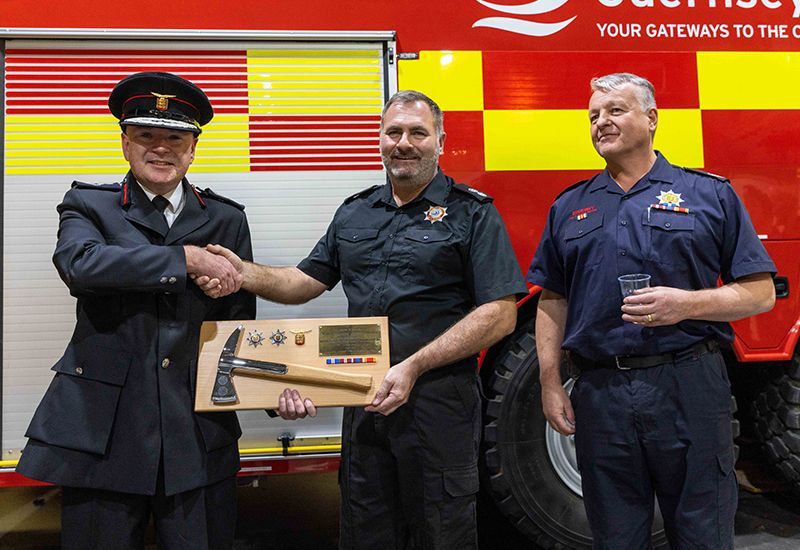 Jim Manning is welcoming retirement having served with Guernsey Airport Fire and Rescue Service for 27 years.

Jim started with Guernsey Airport Fire and Rescue Service on 6th March 1995 and in 2003, was identified for his leadership potential and became a Crew Commander.

As part of his role, he became a Breathing Apparatus instructor and completed the required course at International Fire Training.

Jim transferred to Guernsey Fire and Rescue Service in 2005 and worked across all the watches at GFRS for the next thirteen years. He attended many incidents and gained a great deal of experience alongside his colleagues during his time there. ‌

He transferred back to the Guernsey Airport Fire Service in 2018 as a fire fighter and due to his wealth of experience, Jim progressed quickly through the ranks and achieved the position of Watch Manager in 2020. ‌

Jim went onto Green Watch and set about his intentions of how he saw things progressing. Very quickly, ‘Team Green’ was established and he continued to raise the bar with training and expertise ever since.

‌Jim has been instrumental in the introduction of new Breathing Apparatus procedures at the Airport, all whilst ensuring alignment with GFRS standards. ‌

Airports Fire Manager, Pete Bretel commented – “Jim has been a credit to the service and I’m thankful for his hard work and dedication to the service. I know that Jim is most proud of his staff on ‘Team Green’ and what they have achieved and would like to wish him a happy retirement and all the best for his future endeavours.” ‌

Tim Falla, Head of Training at Guernsey Fire and Rescue Service (representing Jon Le Page, Chief Fire Officer) added, “James has worked for both services and by him moving between the two, it has helped to dispel myths between the teams - helping to identify similarities and differences which has allowed the services to work better together.”