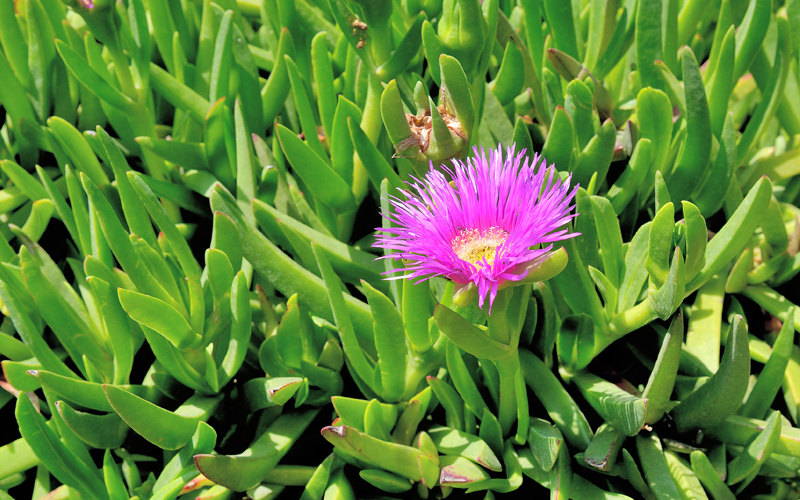 During Invasive Species Week 2022, GCV has organised two work parties that members of the public (aged 16 and over) can attend. The first is at 10am on Wednesday 18th May at Fort Le Marchant where Sour Fig will be removed from the headland. GCV started working at Fort Le Marchant in February 2022 and removed 5 skips of Sour Fig.

The second event will be a BIG FIG PULL at Albecq at 10am on Saturday 21st May. Sour Fig will be removed from the seaward side of the coast road. This is the first BIG FIG PULL at Albecq and it involves closing the coast road to ensure the safety of volunteers taking part in the event. GCV apologises for any inconvenience caused to members of the public by the road closure. GCV would like to thank Castel Douzaine for supporting this event, in particular Rhiannon Cook who helped to organise this BIG FIG PULL.

Sour Fig has been in Guernsey since the 1880’s, it was brought into the island as a garden plant from South Africa. It then escaped from gardens into the wild and spread. Sour Fig was previously killed by heavy frost but harsh winters are now scarce which has enabled the plant to spread. Sour Fig is mainly found around the coast and it spreads across coastal grassland forming a dense mat. It outcompetes all native species and reduces biodiversity wherever it grows. When Sour Fig is removed, the native coastal plants return. These plants can include Thrift, Sea Beet, Sea Campion, Sheep’s-bit and Rock Sea-spurrey.