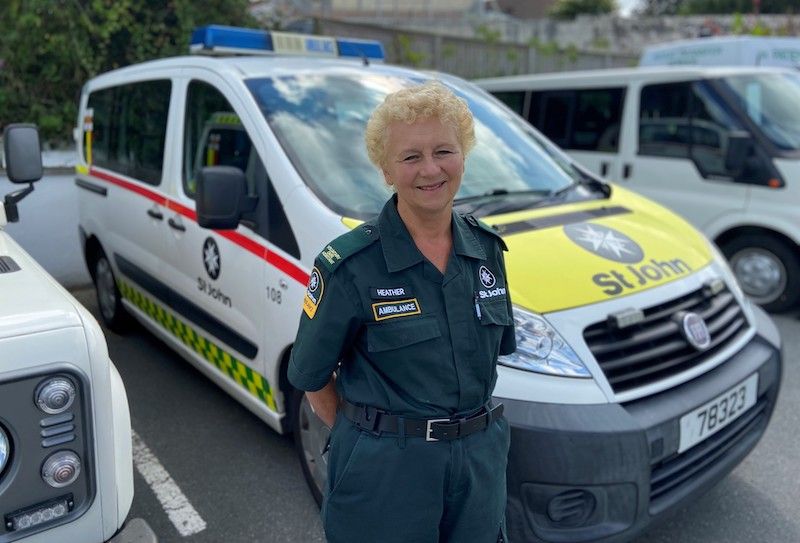 St John volunteer Heather Lucas, who has dedicated many hundreds of hours, serving the community as a Voluntary Care Assistant with the Non-Emergency Patient Transfer Service, is retiring from the role this weekend.

Heather has spent virtually every weekend over the past eight years volunteering as a driver taking patients to and from their regular dialysis treatment and other medical appointments.

Heather has a long connection with St John going right back to when she was 11 years old and was a St John Cadet.

“St John has been part of my life since I was young. My family members worked in the nursing profession and I was used to dealing with older and disabled people. I had also set my heart on becoming a nurse myself, so joining St John Ambulance as a child seemed a good place to start,” said Heather.

Heather, who has had a career in finance, rejoined St John as an adult in 2005 when she became a member of the Volunteer Ambulance Reserve which works with the Emergency Ambulance Service (then known as St John Ambulance & Rescue Service). A few years later Heather enrolled as a volunteer with the St John Ambulance charity. Then in 2013 she took on the role of Voluntary Care Assistant with St John’s Non-Emergency Patient Transfer Service (aka PTS).

“I have really enjoyed having the opportunity to be part of the team, giving service to St John and the community. One of the most rewarding parts of my role has been the responsibility of taking good care of patients and taking a genuine interest in the highs and lows of their renal dialysis journey. I also feel that I have made a difference to patients, especially by returning them home again promptly after their dialysis sessions. I know it has also been helpful providing the service which frees up the Emergency Ambulance crews during their busy weekend shifts.”

One of her most memorable experiences was responding to a major incident with the Volunteer Ambulance Reserves.

“It was late at night after a boat crashed outside St Sampsons harbour. There were a number of injured casualties and we were involved in assisting with the rescue and helping transfer them to hospital.”

Deputy Chief Ambulance Officer Dean de la Mare said: “Heather has always been a valued volunteer having been with SJEAS for 16 years, both with the Ambulance Reserve and giving up her time to regularly to assist transferring our renal dialysis patients. Our volunteers ensure that the patients get to their appointments on time, which may not always be the case if we had to rely on our emergency crews who may get diverted to other emergencies.

Heather is highly committed and extremely personable and has built up great relationships with many of the patients who she has come into contact with. Heather has tried to retire from the Service on numerous occasions but we have always persuaded her to stay longer as she has been so great in doing what she does, it will not be easy to replace Heather we know how much she has enjoyed volunteering for us and she will be greatly missed.”

Local chefs serve up a treat for 2022 food waste calendar