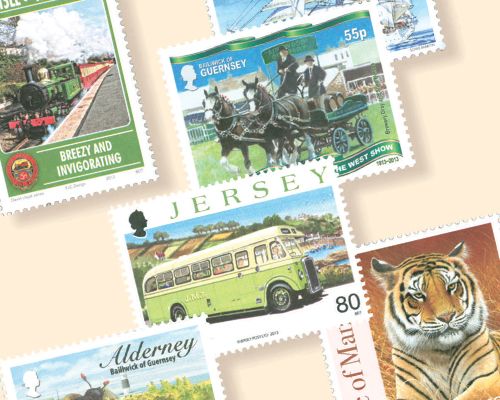 The latest edition of the ‘Collect Channel Islands and Isle of Man Stamps’ catalogue is out, and says its editor, Hugh Jefferies, there has never been a better time to collect modern Guernsey stamp issues: ‘Quite simply, stamps are becoming rarer, and it’s down to our modern habit of emailing and not sending so many letters.

‘Back in 1969, the most everyday and cheapest denomination stamps were produced in vast quantities, nearly two and a half million and the like, but nowadays those figures have dropped dramatically. Whilst Guernsey Post won’t release the actual numbers printed anymore, back in the mid nineties, when those figures were last produced, even a low denomination popular stamp was most likely to be printed in runs of under a quarter of a million, and in the nearly 20 years since computers have revolutionised our lives, that figure is likely to be considerably less.

‘What this means is that less mint condition stamps are in collections nowadays and so it would only take a small upturn in demand for these modern stamp issues to quickly become very sought after.’

The catalogue doesn’t just cover the most recent stamps, it has all of the stamps issued since Guernsey Post began in 1969, with some interesting information from the Occupation years. ‘Generally collectors want mint condition stamps, but the Wartime issues are the exception as the envelopes and items they are attached to tell their own story’, says Hugh, ‘although strictly speaking that strays out of stamp collecting and into postal history.’

It wouldn’t cost a great deal of money to build up a mint collection of Guernsey stamps which can be a timeless record of the island’s social, political and cultural history.

The highest priced stamps are errors due to misprints and so are very rare. A misprint from 1971 was issued for 2 ½ p but is now worth £2,750 due to a colour being omitted.

What to do if you see a seal pup