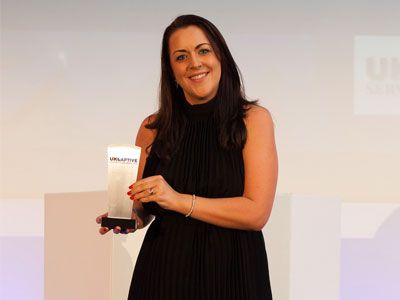 Guernsey has once again been crowned European captive domicile of the year at the UK Captive Services Awards 2014. The awards, now in its second year, formed part of the Captive Live UK 2014 Conference that took place earlier this week and also saw a number of Guernsey-based firms named as winners in their respective categories. In addition, Steve Butterworth, a former Director of Insurance at the Guernsey Financial Services Commission (GFSC), was recognised for his outstanding contribution to the industry.*

Hosted by comedian Andrew Bird, the awards recognised excellence in the delivery and management of captive insurance and celebrated those who have excelled in the last year.

Guernsey was named European captive domicile of the year ahead of other shortlisted jurisdictions: Dublin, Gibraltar, Isle of Man, Luxembourg and Malta. The award was collected by Sinéad Leddy, Technical Manager at Guernsey Finance – the promotional agency for the Island's finance industry.

Fiona Le Poidevin, Chief Executive of Guernsey Finance, said the award was a testament to another successful 12 months for the Island's captive insurance industry.

"I am delighted that Guernsey has received this award for the second year in a row. It is recognition of our international insurance expertise and is a superb way for our captive insurance sector to begin 2014," she said.

Figures from the GFSC show that there were 758 international insurers licensed in the Island at the end of December 2013, compared with 737 a year previously. The net growth of 21 entities included 89 additions, comprising 10 limited companies, six Protected Cell Companies (PCCs), 63 PCC cells, two Incorporated Cell Companies (ICCs) and eight ICC cells.

Miss Le Poidevin said: "Guernsey's strong heritage as a captive insurance domicile is clearly demonstrated through last year's very strong performance. It means that nearly 200 international insurance entities have been licensed in the Island during the last 24 months.

"It is also extremely pleasing that so many Guernsey firms were recognised at the awards, as well as Steve Butterworth, a former GFSC regulator credited with pioneering Guernsey's innovative Protected Cell Company legislation in the 1990s. As an Island we have a particularly strong reputation for client service and innovation, in our insurance sector and the wider financial services industry, of which we are very proud."

Guernsey Finance will also be exhibiting at SIFMA's annual Insurance-and-Risk-Linked Securities Conference in New York on Tuesday 4 and Wednesday 5 March. Industry practitioners attending as part of the team are Mark Helyar, Partner at Bedell Cristin and independent consultant, Mike Poulding. Justin Wallen, Managing Director of Hexagon Insurance PCC at the Robus Group in Guernsey, is also attending the event.