Enigma finds the secret of success 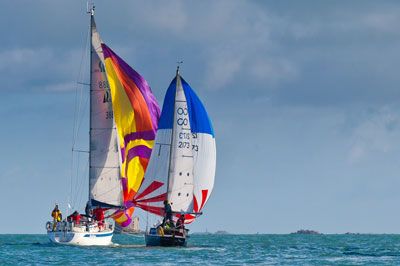 Enigma finds the secret of success

18 yachts took to the water on Saturday 22nd February for the fourth of the seven races that make up the Heritage Frostbite Race Series.

Conditions were calm with a 10 to 15 knot breeze – a marked improvement on the previous race day on which appalling conditions forced organisers to cancel the event. The flood tide later in the day created some interesting challenges for the crews, particularly around Brehon Tower, which only added to the excitement of some closely fought battles for position.

Seven yachts took part in the racer class and the two-lap course took them from the QE II Marina to Brehon Tower with the finish line just off Castle Cornet. Kaya continued her dominance of the series taking first place in the class ahead of Mustard Mitt with only two minutes separating them once the handicap and correction factors had been applied. Kaya now enjoys a 10-point lead in the series.

Heritage's Mark Huntley had a good day, taking the honours in the cruiser class in his Mystery 35 Enigma by a margin of a mere 30 seconds over David Herschel's Bunbury. However, Bunbury still sits in first place, three points ahead of Enigma in the overall results table.

The next race in the seven race series will be held on the 8th March with a 10.00 am start to enable all boats to exit and return to their marina berths over the high tide.

A Notice of Race and registration forms are available at www.frostbite.gg

Details of the remaining series races: