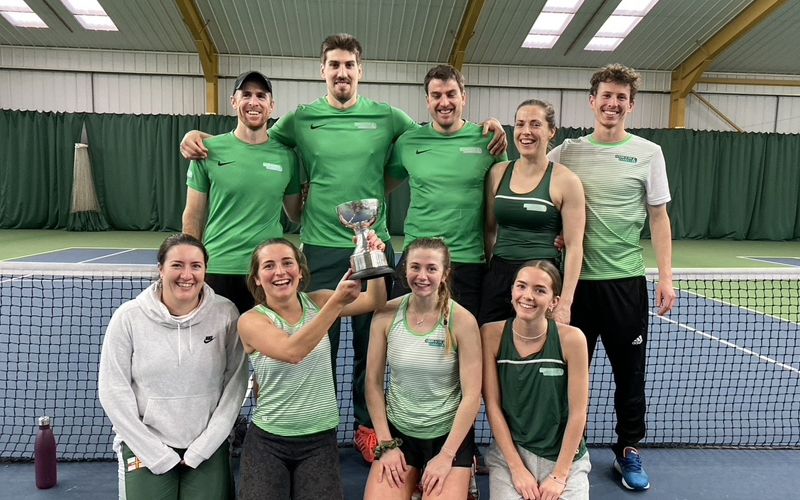 With the tennis Inter-Insular, a visit from the British No. 1 Padel Player and two junior tournaments its a busy time for Guernsey racket sports.

On Sunday 13th, the Guernsey Tennis Team will travel to Jersey for the inter-insular to try and defend the Bucktrout Trophy which they won last year. The team will compete at the Caesarean Club in both singles and doubles and will require 6 wins overall to retain the trophy with Jersey needing 7 points to earn the trophy back. In 2021 Guernsey won the title for the first time in fourteen years winning 9-3 on home soil.

The scheduling of the event will also double up as a nice warm up for the Winter County Cup events in the UK in a couple of weeks in which many of the players will be competing. The CI Men will be in Taunton and the Ladies in Cardiff from 25-27 November.

Guernsey Captain, Rob West: “We are excited to play the annual fixture against Jersey. Last year saw us win the trophy for the first time since 2007 and we are keen to get a win streak like that going for ourselves. The fixture is always very competitive and played in great spirits. We are confident that we can retain the trophy in 2022. We have 3 debutants for us this year (Marcus, Ben & Imogen) who have all been training hard and playing well with some fine results in the local events this year. They each fully deserve their place in the side and it will be great for them to step up into this competition.”

GB No 1 to Coach Island Players

Meanwhile, Nikhil Mohindra who is ranked No1 in Great Britain in the LTA rankings, will visit Guernsey this weekend to deliver a series of Masterclasses to the island team, juniors and individuals. Fresh from representing Great Britain in the Padel World Championships in Dubai last week, Nikhil will spend three days on the island coaching Guernsey players. The sessions have proved so popular that they sold out in 12 hours.

Nikhil said “I’m really looking forward to coming back to Guernsey. I had a great time at the LTA Grade 2 event last summer and I am excited to have the chance to work with some of the players on the island and hopefully pass on some tips to help them improve their padel. Being on the island for a few days without any competition will also give me a chance to see few more of the sights!”

This weekend, the Guernsey Tennis Centre held two competitive events for upcoming young juniors. On Saturday the Club hosted an U10 Team Challenge which saw the Club buzzing with lots of excited children. The Red Team managed to beat the Blue team over a fun afternoon with lots of matches which were all played with exceptional sportsmanship and team spirit.

On Sunday, it was the turn of the U14’s who competed in an LTA Mixed Matchplay event. Twelve children entered the event which was played in fast four format which saw some tight results throughout the afternoon. In the end it was Chloe De La Mare who was victorious, beating Rupert Dorey 4-0, 4-3 in the final. Jo Robinson who ran the event said “It was great to see so many kids enter the tournament and get some good matchplay practice under competition conditions. Chloe has worked so hard at her tennis over the past year, and is easily the most improved player in the age category, so she deserved to win this weekend.”