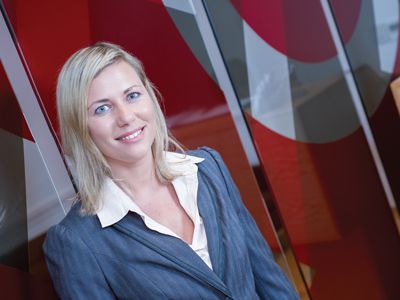 Miss Paiva, who was admitted as an attorney of the High Court of South Africa in 2006, joined AO Hall as an associate in 2010 and specialises in all aspects of corporate law, including investment funds.

Group partner and team leader Sam Shires said Miss Paiva’s promotion recognised the contribution she had made to the firm’s growth.

‘The skills and knowledge that Kim has provided AO Hall and its clients over the past three years has been invaluable and she has become a very important part of the team. She has a natural ability to put clients at ease and has been heavily involved with some of the corporate team’s most challenging work,’ he said.

Miss Paiva, a graduate from the University of Cape Town who relocated to the island in 2009, has extensive experience in the establishment, operation, regulation, management and restructuring of open and closed-ended investment funds and said the promotion meant a great deal to her.

‘It was a bit of a risk in some ways leaving South Africa when I did to pursue a legal career in a new jurisdiction and practise Guernsey law rather than continuing to focus on my career at the law firm that I worked at in South Africa. It now feels, and for many other reasons of course, that that risk has really paid off,’ said Miss Paiva.

Miss Paiva, who is described by legal directories Chambers UK and Global as ‘accessible, proactive with technical expertise and commercially aware’, was a key adviser when AO Hall set up the first protected cell company in Guernsey where lending transactions on a peer-to-peer lending exchange could be facilitated.

She said AO Hall did things differently and was a special place to work.

‘AO Hall encourages members of staff to grow and develop and provides support both professionally and personally in that regard. It is a great environment to work in, and at the same time it is a firm that has a vision – it is extremely focused on client care and providing excellent legal service to those clients. I feel privileged to work here,’ she said.