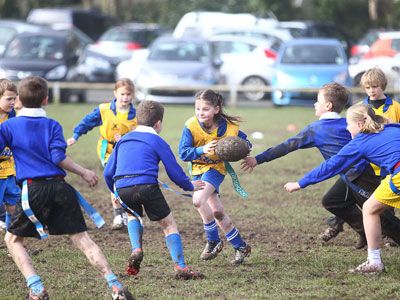 Tag Rugby is a non-contact version of rugby and is played in teams of seven players.

School teams are split into two groups for the festival: years three and four in one group and years five and six in the other with all competing in cup, plate and bowl competitions.

The Guernsey Rugby Academy organise the festival each year With this being Rugby Development Officer, Steve Melbourne’s, first schools’ Tag Rugby Festival after being appointed to the role at the end of last year. Mr Melbourne has over 40 years of experience as a rugby player, coach and Rugby Football Union (RFU) coach educator.

“This is the 15th year of this competition and it seems to have grown year by year, which is great news for the future of rugby on the Island,” said Mr Melbourne.

“Being my first major competition, I have been astounded by the level of support I have received from the Island’s Primary Schools in producing the 37 teams, the Rugby Academy and Secondary schools that are providing most of the support staff for the day and of course both the competition and my sponsors Canaccord Genuity Wealth Management.”

Trophies and medals will be presented to the winning teams in the three competitions as well as the Most Sportsmanlike Team in each age group by Andy Finch of Canaccord Genuity Wealth Management, players from The Guernsey 1st team, St Jacques and Guernsey women’s team for. In addition, all participants will receive an event T-shirt from Canaccord Genuity Wealth Management as a memento of the day.

“Canaccord Genuity Wealth Management is pleased to support the Schools’ Tag Rugby Festival each year as well as the post of the Guernsey Rugby Development Officer. The festival is a great platform to raise the profile of the game and its benefits and to encourage an interest in playing and watching rugby in the island’s school children.

“It’s great to see how Steve’s work and the role of the Guernsey Rugby Academy is helping to champion rugby excellence in the island, especially within our schools.”

The Festival will take place on the pitch at the Garenne Stand at Footes Lane between 09.00 am and 2:30pm on Saturday 8 March. Refreshments for family, friends and players will be available throughout the day.