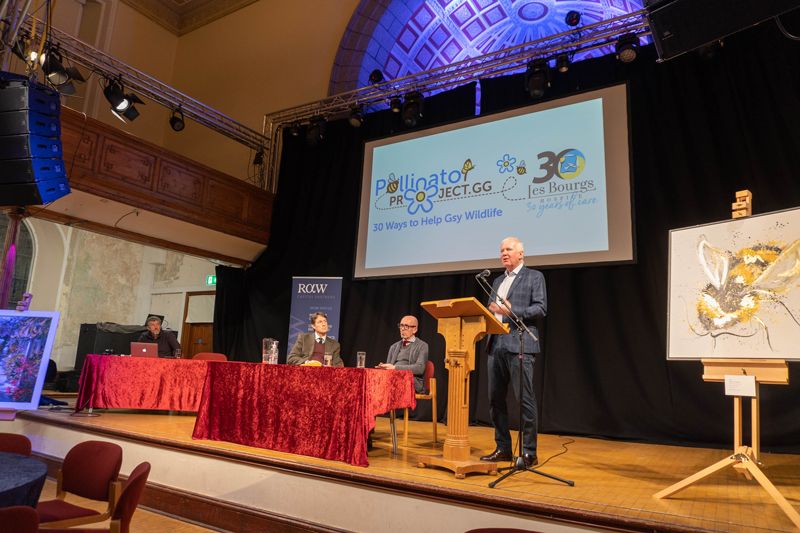 The auction came from an idea by Bridget Spinney, who is both an artist herself and passionate about the natural world being part of the Pollinator Project. She wanted to showcase the amazing calibre of artists, who are living, working and exhibiting on Guernsey so she curated a series of art that celebrates our pollinators – bees, moths, butterflies – and highlights the plight that they are in.

27 local artists created pollinator-themed work for a month-long exhibition at St James, which could then be auctioned to highest bidders, with proceeds going to two local charities. One third of the funds raised will go to Les Bourgs Hospice, one third to the Pollinator Project and the remaining third of each bid will pay the artists contributing for their work. Oils, photographic prints, sketches and pieces of sculpture sold for between £200 and £4000 each, with all items selling on the night.

Martel Maides’ James Bridges and Jason Yendell ran the auction with typical skill and humour, donating their time for free. Thirteen pieces of artwork had received commission bids online prior to the event with well-known artists, including Kevin Hickman and Harriet Bane, reaching an international audience. Some items had bids won by people attending in the room, others were sold to the unnamed commission bidders.

RAW Capital Partners enabled the event to happen through their sponsorship. Tim Parkes, MD of RAW Capital Partners explained why RAW wanted to support this initiative: ‘RAW is keen to be involved in something local that helps the environment at grass roots level. The work the Pollinator Project are doing to educate people about the importance of our immediate environment and what every one of us can do to make a positive impact really hit a note with our team. We were delighted to be involved.’