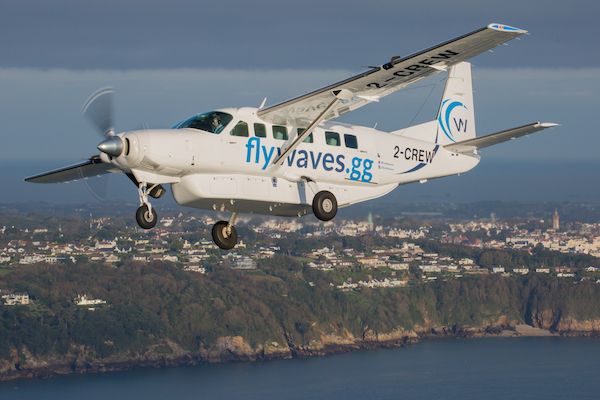 Waves’ has flown its first European flight, with the Guernsey based airline saying this service will open up "multiple travel opportunities for islanders and their French cousins."

The airline marked the occasion by carrying French dignitaries from Caen in the nearby La Manche region of Normandy to Guernsey.

The group were flown to Guernsey last week by Waves for a series of meetings here and in Jersey. Heading up the French contingent was Mr. Marc Lefevre, the newly elected president of the Manche region.

Xavier Souris, the director of Maison de la Normandie et de la Manche, the Jersey based economic and cultural office of the Normandy Region and the Manche département, said: "We are delighted to have booked Waves' inaugural flight from France to the Channel Islands to bring over the president of La Manche for his first official visit. We have followed the progress of Waves since it formed in early 2017 and we are pleased it is so successful."

He continued: "We knew that Waves intended to fly into France and we have organised meetings for them with representatives of both Cherbourg and Caen airports. When Mr. Lefèvre's visit was being arranged we contacted Waves and they were more than happy to oblige. I am impressed by their professionalism and enthusiasm. Thanks to Waves, there will be new opportunities to fly to and from northern France, which, we are confident, will increase tourism and commerce between the Channel Islands and Normandy."

The recent granting to Waves by the European Aviation Safety Agency, known as EASA, of a Third Country Operator approval means that numerous destinations in both Normandy and Brittany are now available to the airline.

Matt Bisson, Waves’ Director of Aviation, said: “We are ready to take charter bookings from customers who want to fly direct to a vast array of French airports at competitive rates. No other Guernsey based carrier has been able to offer this variety of destinations. Caen is a 35 minute hop while added to that we offer flights to Cherbourg and Granville in Normandy and Dinard, Lannion, St Brieuc, Brest, Nantes and Rennes in Brittany.”

He added: “Waves is opening up the whole of this stunning part of France to islanders. We can fly our customers to Brittany’s bustling capital, Rennes, with its galleries, markets and TGV train connections to Paris, or to Brest, one of northern France’s most historically important maritime cities.

“As we are committed to improving the tourism spend in the Channel Islands, we are giving French leisure and business travellers the opportunity to get to the islands and back quickly and efficiently.”