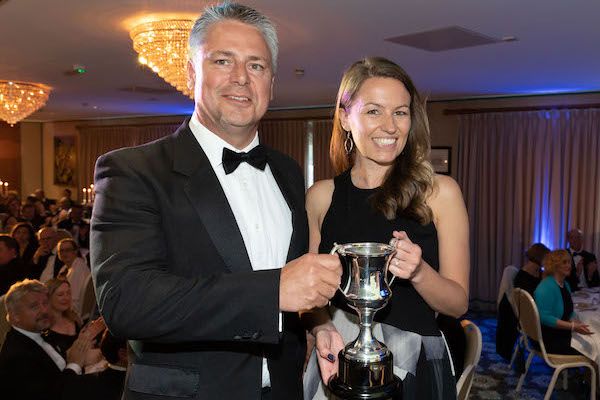 The award is in its third year and was established in memory of the late Chris Le Conte who was recognised as a thought leader in the local insurance sector and formed Robus Group in 2011.

It recognises a candidate under 40 years old with "exceptional commitment who has contributed towards a significant project, development or innovation that benefits Guernsey’s insurance industry."

Miss Walden is described as "a core member of Aon Guernsey’s Insurance Linked Securities (ILS) team." Within her role she manages key clients, as well as assisting with new business development. She has been widely praised for her consistent standards of service excellence, dedication, knowledge and expertise in ILS.

Additionally, Miss Walden assisted in the implementation of a bespoke ILS policy database, making Guernsey world leader in that area.

When she became ACII qualified, Miss Walden was awarded the Excellence in Education award from the IIG for achieving the overall highest marks that year.

Miss Walden said: “I’m humbled to have won this award as I was surprised even to be nominated. Before he left Aon to establish Robus, Chris Le Conte recruited me onto the inaugural Aon Guernsey graduate scheme and so this was a particular honour for me. I’m confident the insurance sector will continue to develop and inspire innovation and I would encourage young people to consider a career within this thriving industry.”

Derek Maddison, Chairman of GIIA, said: “It was enjoyable to read the nominations and learn about the very promising individuals coming up through the local insurance sector.

“Harriet’s nomination cited her skill at building relationships and clear expertise as well as the determination that has driven her. I have no doubt that she will continue to do great work in this important new area.”

Robus Group CEO, Richard Le Tocq, added: “Robus is committed to developing future talent and acknowledges rising stars within the insurance world and is proud to be part of this important initiative. Both Harriet and I previously worked with Chris Le Conte who was a great friend and colleague; I know he would be honoured to be linked to her growing success.”

Motorist "so drunk that he fell out his car"