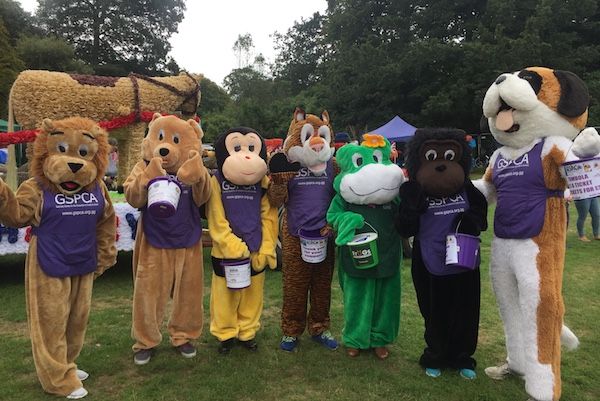 The GSPCA have thanked Northern Trust for its "amazing volunteers" which helped the charity at this year's Summer Shows.

The charity said everyone of the volunteers helped make a "massive difference setting up our stall, dressing as giant animals, serving customers, showing visitors our tortoise and so much more and we are hugely grateful to all of the wonderful volunteers from Northern Trust."

Steve Byrne GSPCA Manager and Lorna Prince GSPCA Animal Welfare Manager presented each of the volunteers from Northern Trust with a few gifts as a thanks.

Mr Byrne said: "We really cannot thank the team from Northern Trust enough, they were just amazing at the West and North Show.

“They are truly amazing and we really, really do appreciate all of their wonderful support and help. Since 2014 Northern Trust have sent 162 staff to help at the GSPCA which is just incredible.

“The staff from Northern Trust have helped with amazing amount of work at the GSPCA and they were great fun from one of them dressing as Terry the Tiger and having bikes jump over him at the North Show as a display to all those that helped dress as giant animals in the ring at the Battle of Flowers.”

Mr Byrne said the volunteers help them to raise the thousands of pounds that they did at the shows.

He also said in the future, the organisation would always be appreciative of any other businesses looking to offer their support and help.

"For those wanting to help the next volunteer induction evening for anyone interested in helping out is on Monday 3 September at the GSPCA with a 18:30 start."