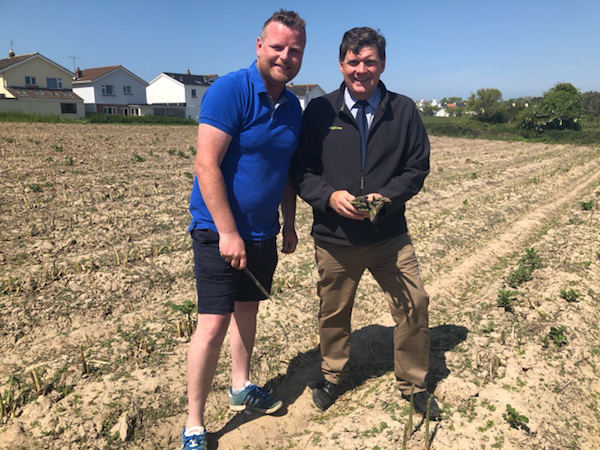 Jersey grown asparagus is available for the first time across all Waitrose shops in the Channel Islands (three in Jersey and two in Guernsey).

The crop, which has taken four years to become established, is now mature enough to be harvested for Waitrose. The plants should continue to produce an abundant crop of spears for many years.

The Grouville based farm is the oldest and largest producer of free-range eggs in Jersey and, with support from Waitrose, were keen to diversify.

It will replace the UK 250g, 400g and asparagus tips lines and production is expected to be approximately 12 ton this year.

Asparagus is in high demand in the Channel Islands with sales at Waitrose up by more than 30 percent in recent weeks.

"The asparagus hybrids that we have planted are noted for their early season growth and good taste.  This, combined with the Jersey climate and good quality soil, create an early season market placement and a taste that consumers will appreciate," Mr McCaffrey said.

"As soon as the plants are two year’s old they are deep rooted and strong enough to cope with dryer conditions often experienced in Jersey during the summer.”

Gary Grace, Waitrose fresh produce buyer, added: “This year is the first full season for the crop which has matured a little later than we had hoped due to the harsh weather at the beginning of the season but we now expect it to be available until at least the middle of July, which is great news.

“The perennial asparagus crop is planted sequentially lasting approximately five to seven years and as the crop yields more spears we will be looking to add more lines to the assortment.”