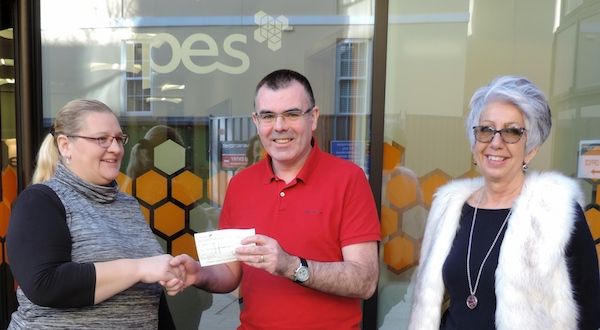 Home-Start Guernsey, Ipes's 2017 chosen charity, was given a donation of £4,600 by the company, after it held a number of fundraising events throughout the year.

On St Patrick’s Day the office had a bake off and a meat raffle, raising £725. In July, staff had a tennis themed mufti day and a table tennis tournament, raising £600. In September, a summer fayre was held raising £850 before staff participated in a Halloween mufti day with spooky activities raising a total of £820 in October for Home-Start Guernsey.

Barry McClay, Chief Operating Officer of Ipes, said: “We are delighted to be able to support such a worthwhile charity on the island. Home-Start do an amazing job in supporting families and we hope Ipes’ donation will enable them to continue their good work.”

Ayesha Camara, Senior Co-ordinator of the charity, received the cheque from Barry McClay at Ipes’ office in St Peter Port. She thanked Ipes and its staff for their "stellar fundraising effort".

Home-Start Guernsey is a local based charity that provides a home visiting programme in which volunteers work with parents and families who have at least one child under five recognised as being "under stress".