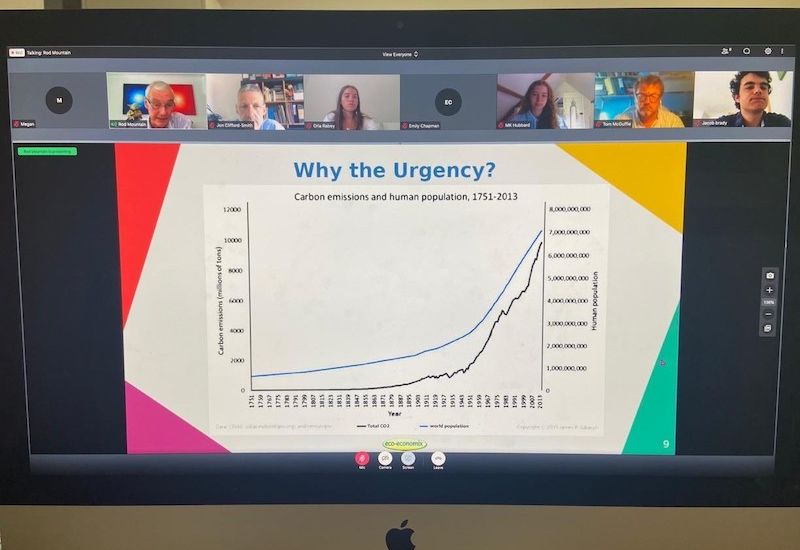 Rather than going on a trip this year, three students from the Ana Leaf Foundation's 'Directors of Tomorrow' were invited to part in a virtual meeting with Partner at Eco Economix, Rod Mountain.

In previous years, students were selected to go on a trip to the UK to visit various places including the Houses of Parliament, ITN News, the BBC’s Media City in Salford, IoD’s head office in Pall Mall and educational conferences.

However, due to the corona virus, the trip was unable to happen.

Instead, Mary-Kate Hubbard from Grammar School & Sixth Form Centre, Jacob Brady from Elizabeth College and Orla Rabey from Ladies College, had the opportunity to have an interactive virtual discussion with Mr Mountain; a sustainable business campaigner, IoD member and Special Interest Group representative. He also recently spoke nationally to IoD members through a webinar.

“I found speaking with Rod Mountain about how businesses should implement climate change mitigation very insightful," said Miss Hubbard. "He began by introducing some key concepts regarding humanity's effect upon global warming, but he explained them to us at a level beyond what is typically heard in the media.

"What I found most interesting was his focus on how eco-friendly businesses can easily be cheaper and more profitable to run, so long as all the right information is readily available for businesses in order to make such changes.

“Considering the views I heard from some of the companies at the IoD Climate Change Convention, I think this emphasis upon the ease and profitability of such changes could be very convincing in influencing a rise in eco-friendly businesses.

"After asking a question about the possibility of legislation being introduced to influence business eco-friendly behaviours, I found it interesting to learn that while new laws may spark change at a fast pace, it would be more likely, and significantly faster, for individual businesses to start making these simple but effective changes immediately."

The Directors of Tomorrow scheme invites teachers to nominate ten students, based on their interest in business, economics and current affairs, to attend the annual Guernsey IoD Convention in October. From this, each student submits a blog reflecting on the convention’s theme; in 2019 it was ‘Climate change: Can Guernsey Clean Up?’. The blogs are then judged by representatives from The Ana Leaf Foundation, the IoD Guernsey Committee and Orchard PR and three students are chosen to attend a further event.

“The Directors of Tomorrow initiative was set up ten years ago to give local future leaders the opportunity to voice their opinions and get involved with topical business news," added Trustee of the Ana Leaf Foundation, Amanda Simmons.

"The students have presented a real passion for this topic and it's been wonderful to hear the knowledge they have taken away from the IoD Convention last year and the recent talk with Rod Mountain.

"On behalf of the Ana Leaf Foundation, I would like to wish all the students the very best of luck in their future studies, and I am sure we will hear from them again as they progress out in the business world.”